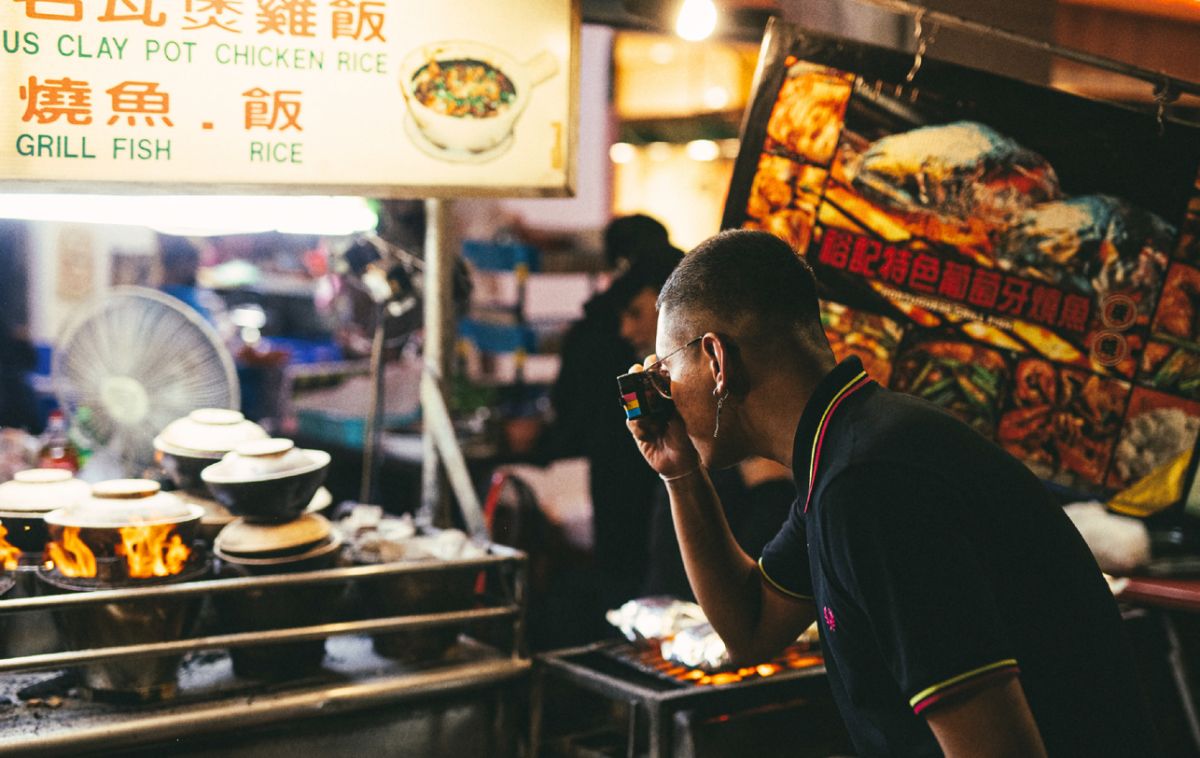 Our journey around the world continues as we celebrate our global shop locations.

Join us as we pay homage to the styling nuances of select Fred Perry located cities and our community who inhabits them.

My name is Amrizal Bin Amir and I am from Kuala Lumpur, Malaysia.

I am a photographer in my free time and also a proud member of the Fred Perry retail team at The Gardens Mall.

It’s timeless. Perfect for any occasion whether you’re at work or just having a night out. Doesn’t matter if you’re a child or an adult, it really is for everyone. Wear it as you like. When I put on the shirt, I wear it with a sense of pride that I am part of something bigger than myself.

What’s the best gig you’ve ever been to in Kuala Lumpur?

2019’s Subculture Live at Rex KL. Hands down. It was my first ever proper gig and I just realised how much more local music there is for me to discover.

Which Malaysia subcultures have influenced you?

Definitely ska. Gotta get to skankin’!

Gerhana Skacinta is the best!

What is your favourite independent venue in Kuala Lumpur?

There’s a secret rooftop venue called Moutou where punk bands frequent and it’s crazy because it’s right in front of the police station. It’s so punk.

What is Kuala Lumpur’s best-kept secret?

Food of course! Try Top Hat or Precious China at Central Market. It’s a fusion of Malay, Chinese and colonial English cooking. They’re so unique and the way the food is prepared, that in itself is a work of art.

Best place to hang out in Kuala Lumpur?

Rex KL, Petaling Street where it used to be a theatre in the past. Here, you’ll find your go-to for art exhibitions and live performances. To add, they’ve got a surreal collection of literature gems in BookXcess, and even a wide array of food and beverage outlets to keep you and your friends occupied! It’s also where our store used to be at and now it’s turned into something for the arts. I’m glad our store was there in the early inception of the venue.

Isaac Lloyd, I am from Doncaster but currently living in Manchester.

DJ, tailor and employee at the Manchester Fred Perry store.

The Laurel Wreath I believe is like a universal language. Everyone who wears the shirt, whether you're a soul boy, a mod, an acid house raver or a punk, there is an unspoken level of respect between you all when you see the Laurel Wreath.

What’s the best gig you've ever been to in Manchester?

I recently saw Miles Kane at the Albert Hall, it was mega. The man is an absolute style icon and is so good to watch live. Me and me mates where bouncing about all night long. He has popped into the Manchester store before and was such a genuine fella.

Which UK subcultures have influenced you?

I take a lot of inspiration from many subcultures and eras but I would say one subculture that I take the most influence from is Northern soul/soul boy era. I'm a Northern Soul DJ and have been in love with the music for a while now. I love the whole record collecting aspect of the culture, finding rare records that either people haven't heard or just don't have. The style of those who went dancing has inspired my own style as well. I'm always seen rocking a pair of loafers with a wide silhouette trouser that flares out when I hit a naughty spin. I think it helps my obsession being in the epicentre of where northern soul started.

Take That, I know what you’re thinking but old Take That put out some absolute bangers. That Progress album is mad. Bringing back Robbie for it, we are all partial to a bit of Robbie Williams. Also, the first album Take That and Party has that Manchester house sound to it, big drum breaks and acid synths.

What is your favourite independent venue in Manchester?

Café Blah in Withington. I know the owners Adam and Tess very well and they have created a great space for creatives to come together. The café has this European vibe to it with all the furniture being vintage and the seats outside facing the street. There is art covering all of the walls, most of the artwork created by the owners themselves. Every Thursday they do a film club so if you're ever around that end of town and need something to do Thursday night get yourself down to Café Blah.

What is Manchester's best kept secret?

Fletcher Moss park in South Manchester, in particular the botanical gardens. When you think of Manchester you think of industrial buildings and cranes but there are actually many places of greenery. It's nice to have somewhere on your doorstep to get away from the hustle and bustle of the city and take in some nature.

Best place to hang out in Manchester?

The Castle Hotel, obviously. It's my favourite pub in Manchester, the bar staff are mint and the characters you meet in there are top. It has a great gig space and I've seen some amazing up and coming bands in there. You will always find me in there so if you see us come have a pint and say hi.

My name is Ayen Pino-McLarty, I was born and raised in Toronto Canada.

I am a musician and research assistant at the University of Toronto and a member of the retail team at the Toronto Fred Perry Store.

The FPS to me is a staple of counter-culture and progressive movements. It’s always been an eye-catching piece that can be worn in so many ways and styled to fit everyone's unique taste!

What’s the best gig you’ve ever been to in Toronto?

I'm a huge Dev Hynes fan, so seeing Blood Orange in Toronto has probably got to be my favorite gig in recent memory.

Which Canadian subcultures have influenced you?

The skate scene here has been one of my most influential subcultures. The loose clothing and carefree attitude toward dressing have helped me develop my own style.

I’ve been really into DEAR-GOD lately! They're a great band.

Where is your favourite independent venue in Toronto?

I'm in love with the Opera House in the Riverside area of the city. I saw my first show there and it has a very special place in my heart.

What is Toronto’s best-kept secret?

Best place to hang out in Toronto?

I really like walking around the Dundas West area. There are great shops, restaurants, and cafes in the area that make it a great place for a weekend hangout with friends.

It’s staple of my wardrobe and a symbol of the brand’s heritage.

What’s the best gig you’ve ever been to in Riyadh?

The Pitbull concert in Al Diriyah near Riyadh.

Which Saudi Arabia subcultures have influenced you?

Saudi Oud Musicians and singers such as Abdulmajeed Fahad.

Where is your favourite independent venue in Riyadh?

Jax District which usually houses art galleries but can also host music gigs is probably the most unique one in town.

What is Riyadh’s best-kept secret?

Best place to hang out in Riyadh?

Wadi Hanifa - it's longest and most important valley near Riyadh.  It’s a natural water course and feels like a 180 degree switch from the city centre.

This drop of Limited Release Fred Perry Shirts is available to purchase online and from their respective shops from Thursday 1st September.