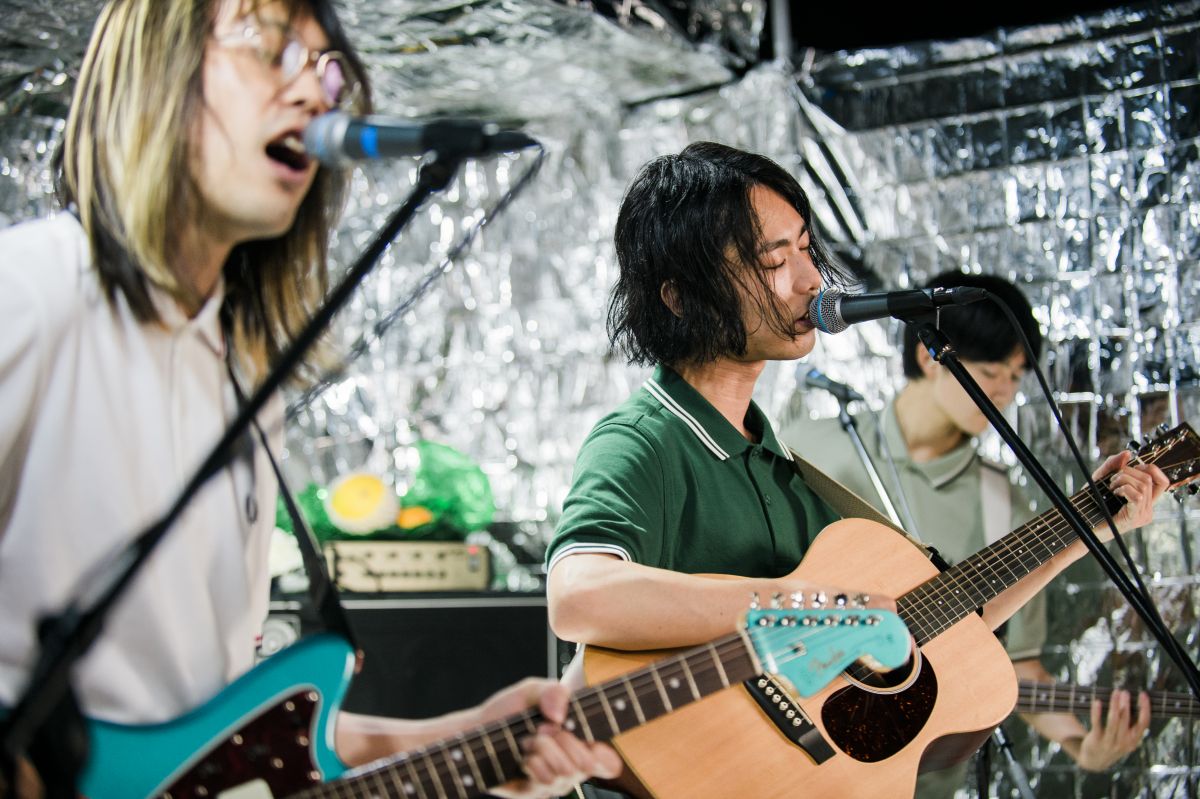 Ahead of their new album release ‘A Daze In A Haze’, Japanese alternative band DYGL perform a set of new songs and familiar favourites, exclusively for us. Following their performance, we caught up with lead vocalist and guitarist Nobuki Akiyama, to find out about the band’s progressive new sound.

How would you describe the type of music you make?

DYGL is the main band that I am associated with, but I also make music personally, so if I take those into account, I would describe my music as strongly coloured, with a vivid sound, blending genres together. I am very much into rock and indie rock, as well as the sounds of the Billboard Top 50, like on the TV show "Best Hits USA" that I used to watch when I first started to enjoy music. Ordinary pop music is not so interesting to be honest. That is why I am influenced by bands and singers who cross over the lines of categories. I appreciate a sound that transcends boundaries and that are out of categorization. Something that I hope is evident in my own music.

Sink
What music did you listen to growing up?

Thanks to my father, I listened to the Eagles and The Beatles as a small child but I was not really into it. TV shows were not my thing so I didn’t know about one of the biggest Japanese Idol groups SMAP that everyone had heard of. Gradually, some of my friends influenced me to listen to music but I still could not even name any famous musicians until the end of my primary years and that is when I started liking Japanese rock bands such as BUMP OF CHICKEN or ASIAN KUNG-FU GENERATIONS, or hip hop groups who were leaning towards pop sounds like RIP SLYME and nobodyknows+. It was during my junior high school days when I began looking for the sounds of foreign bands, The Offspring, Sum 41, Nirvana and Oasis. I then started digging more until I found out about The View, The Libertines and The Strokes who really made me think, oh this is the sound I was always looking for and this sound is what I was being called for. I remember seeing The View's first album on sale in a local store and I realised that their average age was 17 and wondered what kind of life I would have to lead to be able to sell CDs in a foreign country. I paid for a Japanese version with small change that I had as pocket money, then I read the liner notes and discovered that the man who discovered The View was James Endeacott from Rough Trade Records, who had also discovered The Libertines and The Strokes when he was an A&R. It was also around the time that YouTube was becoming more and more popular, so everything just started to widen from there. Eventually I started a band with a friend from junior high that we continued until about the middle of high school. Our dream was to be able to reach a global audience and we were uploading our materials to Myspace.

Spit It Out
What is your process for making music?

I often start by creating sounds before lyrics. I would play around with guitars or any instruments until I get anything that feels good or emotionally moved and I go from there. I try to find out if it is the chords, the melody or the beat, and record or try to remember it. I suppose you could say my process starts with a phrase as a baseline. Some falls spontaneously, and other times I just tell myself that I'm going to write a track. I have several instruments within a hand’s reach in my living space and I would try to portray the whole picture of the track first and then build it up. I do this especially with DYGL. If I get a source sound from another member, I am the one to develop it into a track little by little, but I still feel I have a lot to learn in terms of arrangements so I hope to be able to create more original stuff. Having made three albums as DYGL, we now know what we are capable of. Also, with regards to layering lyrics onto sounds, I usually just listen to it and write down all the emotions, memories and things I want to say that come up from them, and then keep any words that shine. The basic idea is to use words that are evoked by sound, and I usually write down poems to keep my mental state all healthy so some elements might unconsciously be reflected in the lyrics from that.

Revolver in Taiwan. Someone told me that the venue is owned by an Australian or British person and maybe that is why it has a pub-like feel to it. I like REVOLVER’s vibe and Taiwanese weather mixes well with the vibe I suppose. The first floor operates as a pub and you go to the second floor for the music. It's just a fun place to hang out really. Now I feel the same for the Shacklewell Arms in London which is definitely my favourite place, too. When we play live, I do like the feeling when the crowd has come just to see us, but I also like the energy you get when you get a good mix of people and you don’t know what’s going to happen next. It’s nice to have a gig venue that you don’t necessarily need a ticket to get into, but welcomes people who drop by for a drink and some live music. Currently, there are not so many places like that in Japan.

Half of Me
Favourite place to go after dark in Tokyo?

The first thing that came to mind was Kannana-Dori Avenue, the route that I use to walk home after the last train. I love to take a walk along this road as it makes me want to take little diversions while listening to music.

Bushes
What does the Fred Perry Shirt mean to you?

I could find a polo shirt from any other brand but Fred Perry seems to always be updated. Classic, yet always modern. My impression of the Fred Perry shirt is that it resonates with the youth, but also with those who have always loved it which is very British in that sense. I see music in the shirt and I like how it’s not just a shirt. It’s locked in with other cultures. The Laurel Wreath to me, will forever be cool. 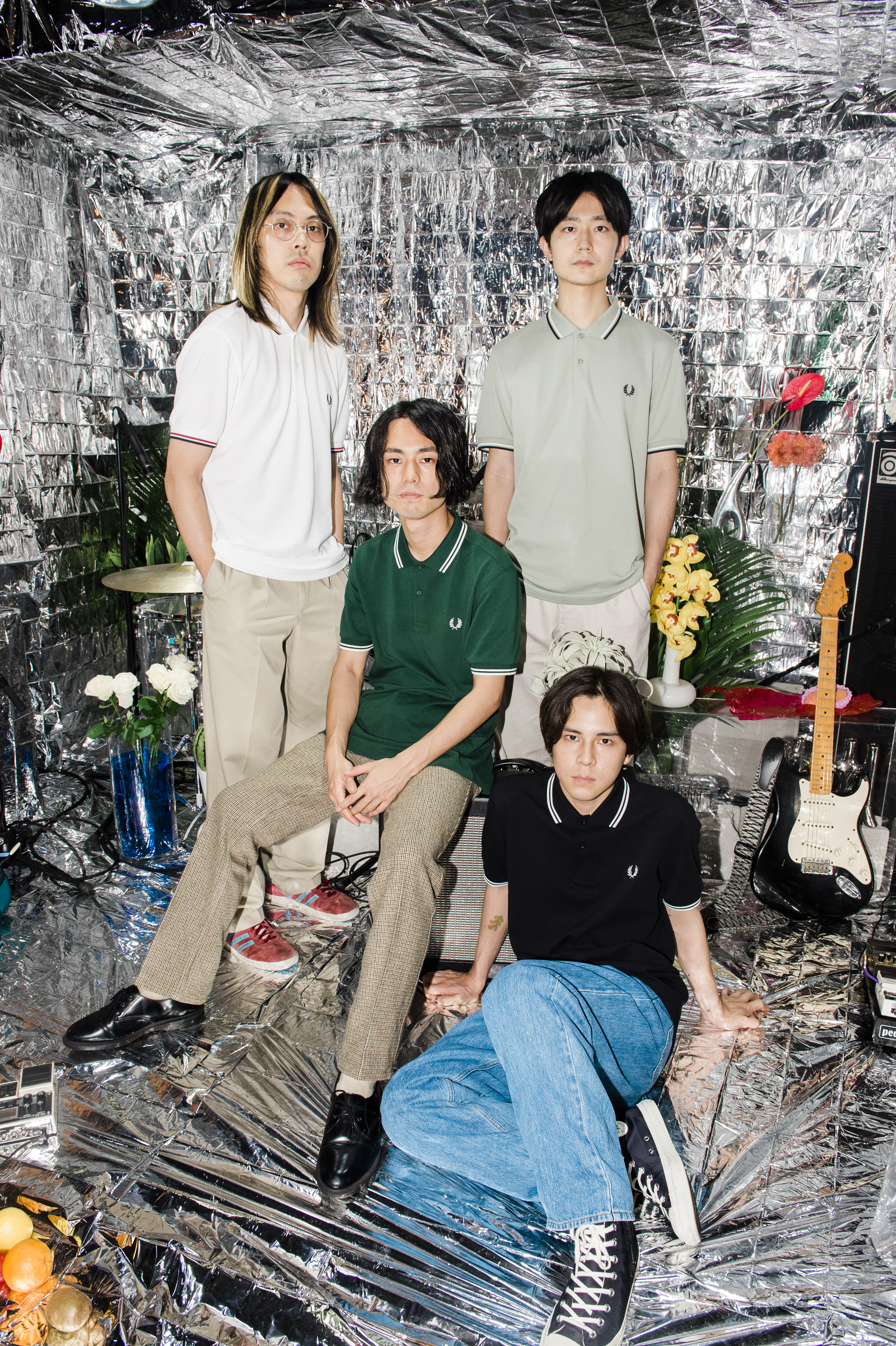