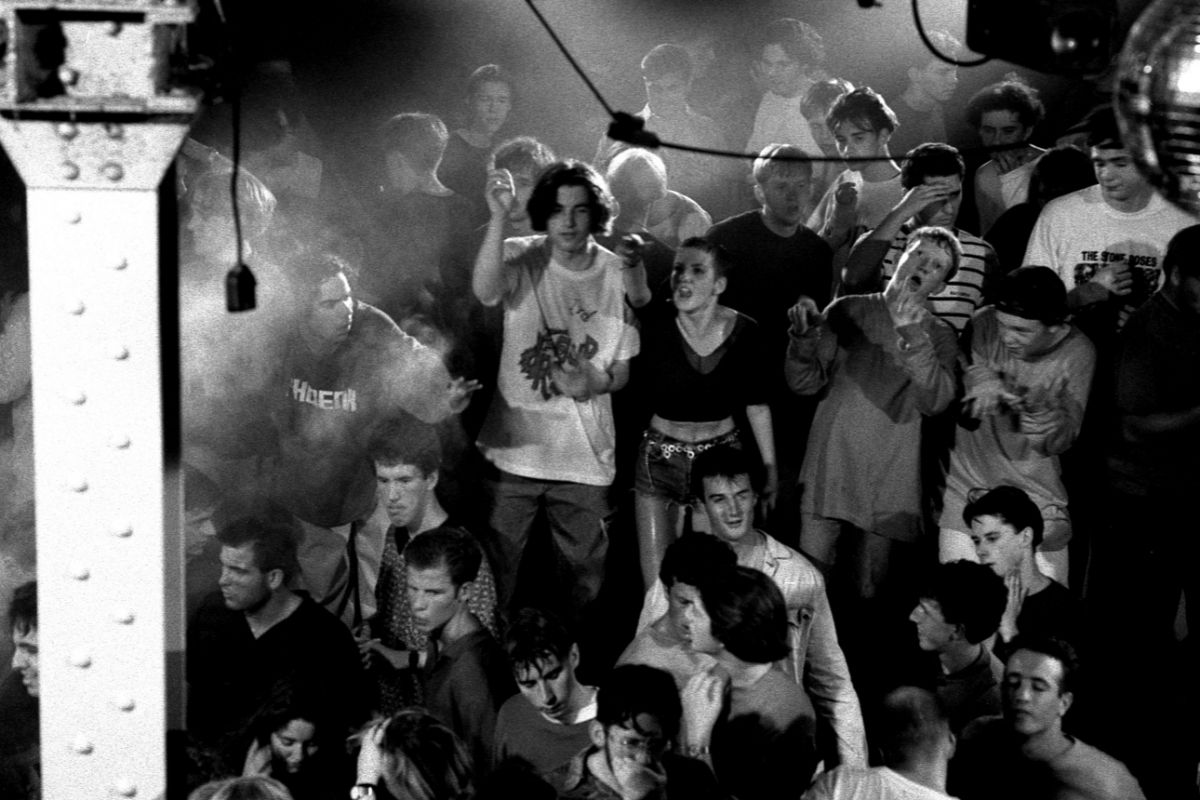 A Brief History of Nightlife

We chart how nightlife has evolved from the ‘70s to the present day.

Nowhere defined the decadence of the late-70s more than Studio 54. The legendary NYC disco club (launched in 1977 by Steve Rubell and Ian Schrager) was housed in a former TV studio and remained a Manhattan hotspot until its closure in 1980. Mega-stars of music, fashion, film and art - including Michael Jackson, Grace Jones, Calvin Klein, Liza Minnelli, Andy Warhol and Salvador Dali - partied alongside the city’s hottest dancers, drag queens and models. Gaining access to Studio 54 was tough: Steve Rubell wanted fun vibes and a socially “tossed salad”. Celebrities or anyone with an attention-grabbing image were ushered straight in (Bianca Jagger once allegedly arrived on a white horse), while hundreds of other hopefuls clamoured outside, desperate for the doorman’s approval. Inside, however, everyone mixed and mingled prompting Warhol to describe Studio 54 as, ‘A dictatorship on the door and a democracy on the dancefloor’. The soundtrack? DJ Nicky Siano’s irresistible mix of Chic, Sister Sledge and Donna Summer.

From the ashes of the 70s punk scene came a new movement, percolated in small, scruffy, central London bars and discos. Hosted by former punk ‘face’ Steve Strange and his DJ mate Rusty Egan, the twosome initially promoted weekly Bowie-themed nights in a dingy Soho club named Billy’s, attracting misfits including ex-punks, rockabillies, squatters and fashion students. Their next venture, Blitz, further upped the dressed-to-thrill ante, while embracing futuristic DJ sets full of synth-filled tracks by Kraftwerk, Telex and Cabaret Voltaire. Blitz was frequented by the likes of Boy George and John Galliano, who helped kick-start the ‘80s New Romantic movement, widely documented in newly-launched style magazines i-D and The Face. Blitz required nerve and commitment: only those who made-an-effort to look spectacular could cross its threshold.

Evolving from the post-punk of the late ‘70s Goth proudly existed outside the mainstream. Protagonists frequented cigarette smoke-filled nightclubs such as The Batcave in London, or Le Phonographique in Leeds, flocking to gigs by bands including The Sisters of Mercy, Bauhaus, The Cure, Killing Joke and Alien Sex Fiend. Goth style reacted against bland high street fashion, embracing pointy boots, studded belts, with crucifix necklaces, multiple-bangles, heavy eyeliner and dramatically backcombed hair. Stereotyped as moody or introverted, Goths were actually a sociable bunch, willing to brave ridicule and hassle from passers-by, in order to pursue their love of after-dark dressing-up, drinking (especially Cider mixed with blackcurrant juice), and dancing.

The Sisters of Mercy - Anaconda

Acid House emerged at Shoom, a small yet influential South London party in 1987, run by DJ Danny Rampling and his partner, Jenny. Shoom blended Ibiza’s carefree vibes with the house music emerging from Chicago and Detroit at the time. Not to mention, a newly discovered drug named Ecstasy. Other Acid House club nights soon sprang up in the Capital, including Spectrum and The Trip, before the vibes spread nation-wide. Each weekend thousands of youths flocked to illegal outdoor Acid House raves or warehouse parties, prompting tabloid hysteria and police clampdowns. Colourfully dressed in loose-fitting dungarees, oversized Smiley-logo Tees, bucket hats, shorts, plus bum-bags, sneakers or Kickers. Nightlife from previous decades seemed tame by comparison.

Emerging from the UK’s Hardcore and Rave scenes of the early-90s, Jungle fused breakbeat with Ragga, Dub, Techno and MC vocals. Result? Something dark, gritty, fast and loud. One of the first tracks to be defined as Jungle was the heavy ragga bassline-fuelled We are I.E, by Breakbeat Hardcore producer, Lennie De Ice, which was actually recorded in the late-80s. Jungle-centric club nights gradually gained popularity across the UK. Rage and AWOL, both in London, or Quest in Wolverhampton, were among the most notable where you could see Jungle’s very own superstar DJ’s and producers, including Goldie and Fabio and Grooverider spin this new uncompromising music. Jungle enthusiasts oozed attitude and fierceness, in an array of bodycon Lycra dresses, hot pants, leather waistcoats and jeans, while the guys, embraced a mix of camouflage gear, MA2 flight jackets and Nike Air Max sneakers.

By the 90s, the US garage sound had evolved thanks to US DJ Todd Edwards’ sonic experiments, which then crossed the Atlantic, had the tempo sped-up by London deck-masters such as DJ EZ, eventually mutating into UK Garage. Stretched vocals, rolling bass, a forceful snare, and a 2-step or 4/4 beat characterised this genre. UK Garage events usually took place on Sundays, for an up-for-it multiracial crowd, pioneered at South London parties such as Happy Days (founded by Matt Jam Lamont, and kicking off at a very early 10am), or club nights like Twice as Nice. The original UK garage scene was about living for the weekend, fostering not only its own music but also distinctively aspirational style and attitude. Head-to-toe Italian-designer clobber - Moschino, Versace, Iceberg and D&G - was typically accessorised with Gucci loafers, a bottle of champagne, and some seriously slick dancefloor moves.

The district of Hongdae in Seoul became crucial to the growth of Korea’s Hip-Hop scene, during the late ‘90s. Hongdae was where young Korean fans of American Hip-Hop would hang-out to share cassettes and CD’s and generally bemoan the absence of local Hip-Hop venues. Luckily, one Hongdae nightclub enabled Korean Hip-Hop to gradually forge its own identity. From 1997 – 2001, Club Master Plan became an after-hours alcohol-free hotbed of rap and freestyling thanks to its well-attended open-mic sessions. Its enthusiastic regulars rocked baggy jeans, oversized shorts and T-shirts and baseball caps worn backwards, fusing Asian and Western influences into a coherent look and sound. Notable Korean Hip-Hop talents to emerge from Club Master Plan include DJ Wreckx and MC Meta. The latter formed the group Garion, along with Naachal and J-U, proudly rapping entirely in Korean, and paving the way for other Korean Hip-Hop acts including Dynamic Duo, Verbal Gint and Epik High.

New Rave channelled the giddy spirit of 90s Rave, with a colourful, tongue-in-cheek aesthetic for a new generation of club kids. The movement gathered pace via social media site MySpace and was further celebrated in style magazines. Klaxons and Test Icicles are often cited as New Rave’s figurehead bands but others including the rapper and DJ Niyi (who memorably rapped about his fondness for poached eggs, hosted Lady Gaga’s debut UK gig, and was many years later cited as an inspiration by Tyler, the Creator), and Namalee ‘n The Namazonz (who performed tracks such as I Wanna B A Kartoon) were also key to spreading New Rave’s surreal music and style. In London, warehouse parties or club nights such as Anti-Social and All You Can Eat brimmed with youths attired in taste-defying combinations of garish skinny jeans, neon-cartoony Tees, lop-sided haircuts, whistles, glowsticks, and accessories fashioned from all manner of random items. Within a year the New Rave look was all over the Paris runways.

Michael Teufele and Norbert Thormann launched Berghain in 2004, in a former Berlin power station. Despite the success of various Techno clubs in other German cities, Berghain has become the most revered, consistently attracting international devotees and defining Berlin as the 21st Century’s Techno capital. Berghain boasts an incredible, bespoke sound system, an evolving roster of the world’s best Techno DJs – including Ben Klock, Marcel Dettmann, Sammy Dee and Marcel Fengler - and parties that regularly last for 48 hours. Style-wise, dressing up, or wearing as little as possible, is equally acceptable at Berghain, though diehard regulars tend to favour a post-athleisure mix of shorts, vests, trackies, Tees, chest harnesses, crop tops, army pants and sneakers, in various hues of black. Berghain’s unique, free-spirited atmosphere is rigorously upheld by ultra-strict door staff, creating long queues outside. Not to mention a ban on photography. All of which maintains the club’s mythology and keeps the focus on dancing, not posing.