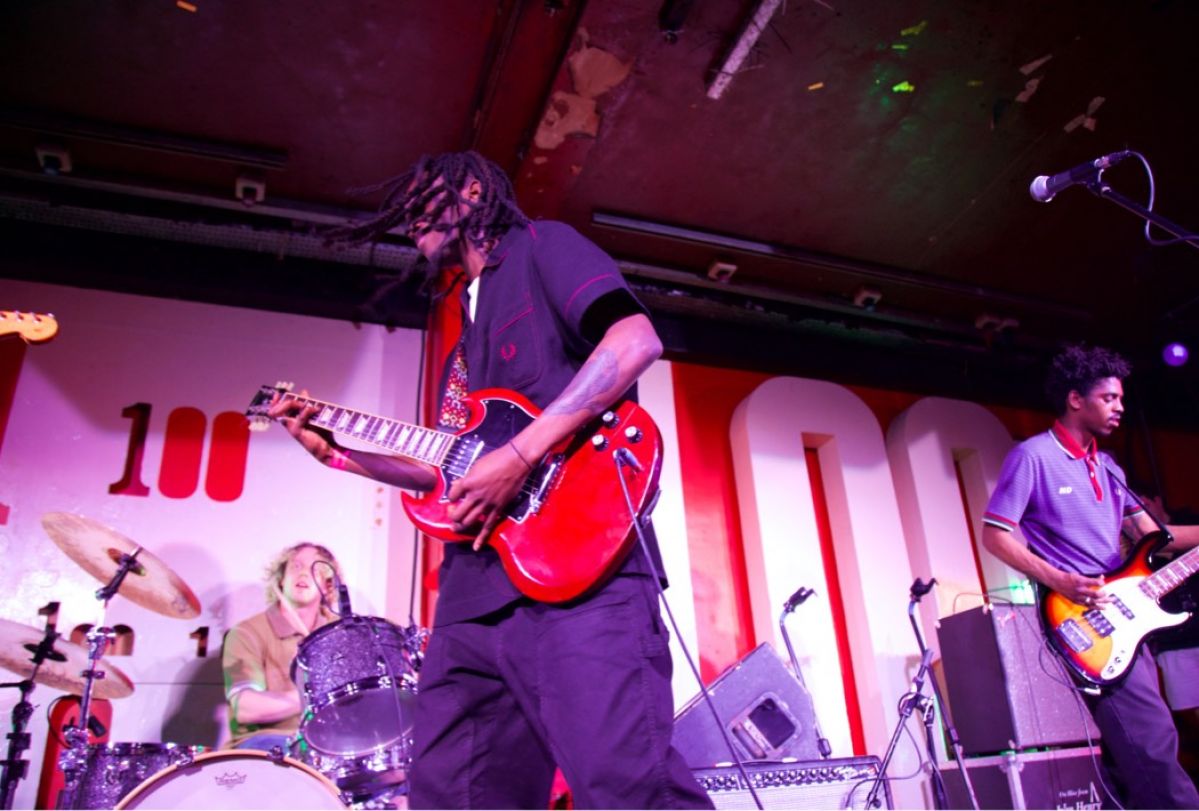 We head to London’s 100 Club for a night of live music and spoken word, curated by menswear designer and Fred Perry collaborator Nicholas Daley.

Nicholas Daley may be known as one of the UK's best fashion designers but he’s also carved out a major rep when it comes to supporting British music. Ever since his first project - which saw him collab with Don Letts (himself no stranger to the 100 Club), Nicholas has managed to infuse musical themes - and some incredible musicians - into his work, adding a rich cultural underpinning to everything he does. In a way, that’s why his ongoing collab with Fred Perry is kind of a no-brainier - as a brand Fred Perry are also all about culture.

So tonight, with a line-up of musicians including aden and Nadeem - two previous winners of the music grant program by Nicholas and Fred Perry, alongside legendary spoken word poet and author Roger Robinson and emerging rock powerhouse Sam Akpro, both the stakes and the sense of anticipation feel super high.

Holding the whole thing together is Nicholas himself, who as the event host seems to have mastered the art of being in several places at the same time - greeting guests at the door, introducing the bands, looking after the musicians and performers backstage. If it wasn't for the fact that the DJing duties are being masterfully taken care of, it would be easy to imagine he'd be doing that too.  As it is DJs Zakia Sewell and Nabihah Iqbal both take turns, playing sets while the stage is being prepped for the next performer. From The Slits to The Clash to Anti-Pop Consortium, the tracks selected are as unpredictable and as eclectic as you can imagine - helping us attune our ears to the wealth of live music about to come.

It's easy to be fooled by their unassuming presence - here they are sitting behind an electric piano, as many singer-songwriters have done before them, but as they begin to play these ethereal, melodic sounds on their keyboard pulling us into their first song, it's obvious that their approach is something totally fresh and original.  Mixing American folk with soulful, complex jazz chords and creating layers of melody rather than definitive hooks their sound is the perfect match to their voice - a powerful, vulnerable voice, reminiscent of Joni Mitchell at her best. It's taking a mix of genres and pushing them to their extremes - to the outer reaches of what classical music, the choral tradition, socio-political soul and a gentle folk song can do. Their short set includes an epic version of ‘Caution,’ the song they were able to record at Metropolis studios through the award – which has the audience mesmerised.

Next up is Roger Robinson, whom Nicholas appropriately introduces as an OG. Despite the fact that Roger has been perfecting his craft for the past twenty or so years and is rightly recognised as one of the UK's most talented spoken word artists, coming up on stage after aden to this hyped crowd looks like a disaster waiting to happen. Rather than fight for their attention, Roger waits and breathes and allows the audience to settle, his silence proving more powerful than the surrounding noise. And it's worth the wait. Roger’s voice with his unforgettable Trinidadian accent is easy but compelling. As he commands the attention of the whole room, he delivers a handful of poems - pithy prose punctuated by short introductions that draw us into the stories even more. At one point, while introducing the poem ‘Grace’, his voice cracks and it's impossible for him to hold back his tears. ‘Grace’ is a poem, he explains, about a Jamaican woman, the head nurse who looked after his son who was born prematurely and who but for her determination and care would have surely been written off as too weak to live. It's a powerful moment. After his set and throughout the night a constant stream of people walk up and shake his hand, thanking him.

With the arrival of Nadeem Din Gabisi, it becomes obvious that the programming of tonight is not fluke and is in fact super considered. Nadeem Din Gabisi's Sierra-Leonean background seems to provide a context for him to explore all sorts of musical avenues with complete freedom. This is some next-gen afro beat shit – it’s as if Iggy Pop meets Fela Kuti in a London tower block and decides to make some grime tracks together. It's a high octane mixing of cultures and sounds and places and it sends the crowd off the hook. No wonder these guys won the Fred Perry music grant last year! At one point they have the crowd chanting ‘Wata Mami’ - a traditional term of gratitude appreciating the blessings of everyday life in Senegal. It's surreal, absurd and brilliant all at once.

Last on stage is Sam Akpro and his band. They take the music into an altogether different direction, a wall of guitar sounds that trigger memories of great American indie groups like The Pixies and Arcade Fire and British bands like The Cure and Radiohead, only with a black, south London edge and style about it that make it way cooler than anything. Their sound is BIG, stadium big and they have the stagecraft to match, which in many ways makes them the most perfect band to finish the night here at the 100 Club - a place known worldwide as a springboard for emerging rock bands.

Somehow, they tap into a different type of energy within the crowd, which is amazing to witness and by the time the whole gig is over it’s hard to tell exactly what just happened. We went from spoken word and poetry to all-out rock - with afrobeat and folk and crazy experimental sonics in between - and yet it all fit, it all worked and it somehow managed to even exceed the hype that preceded it.

On reflection, maybe that's what Nicholas Daley's plan was all along – to provide a new cultural context for these seemingly disparate, boundary defying musical creatives to co-exist and shine.

SUBCULTURE
Fred Perry and
Charles Jeffrey Party
at the 100 Club