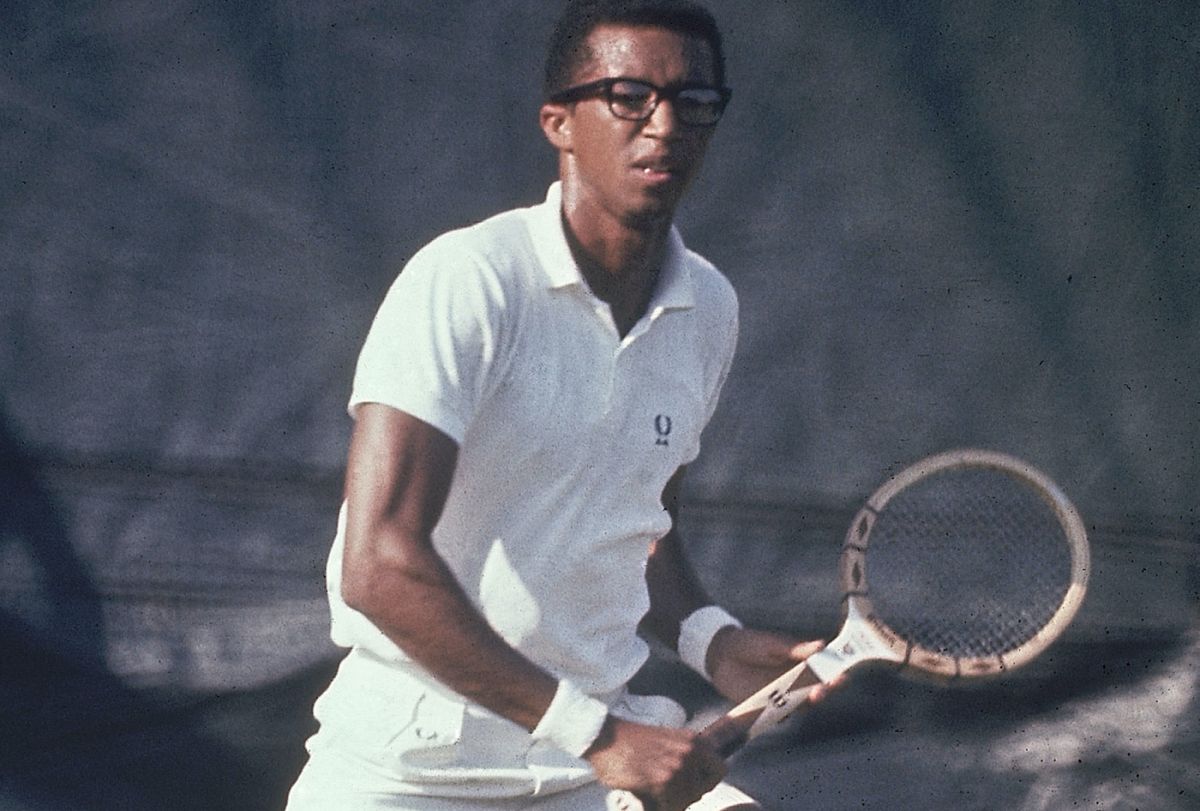 The Enduring Legacy
of Arthur Ashe

We examine the forever legacy of Arthur Ashe and how he used tennis as a powerful catalyst for change.

It’s 1975. A cool, calm and collected Arthur Ashe steps out onto the Wimbledon court. He takes off his ‘USA’ embroidered track jacket to reveal a white polo shirt with a huge ‘70s-style blue collar and tiny white tennis shorts (his signature piece). He looks incredibly composed for someone that’s about to face the biggest match of his career. But that’s Ashe – completely unflappable. His opponent is fellow American Jimmy Connors, and they are about to battle it out for the title of Men’s Singles Wimbledon Champion.

This wasn’t their first encounter on the court; just two years earlier Ashe lost to Connors in two consecutive finals during the South African Open. But this time was different. Ashe had an unexpected game plan up his sleeve. You see, it wasn’t just about the physical performance with Ashe, but the mental agility too. And Ashe was more agile than most. During this match, his shots were soft and calculated and with smooth backhands he was able to open up the court, which his opponent didn’t see coming.

Just a week before his 32nd Birthday, Ashe was awarded the title he’d been working towards his whole career. Not only was he the official Wimbledon Champion, but he was the first black man to ever be awarded with the title. A momentous achievement on both parts.

Ashe’s win was as calm as his entrance and he celebrated with a single clenched fist in the air. A powerful symbol for a man who had spent his entire career to date fighting for racial equality. 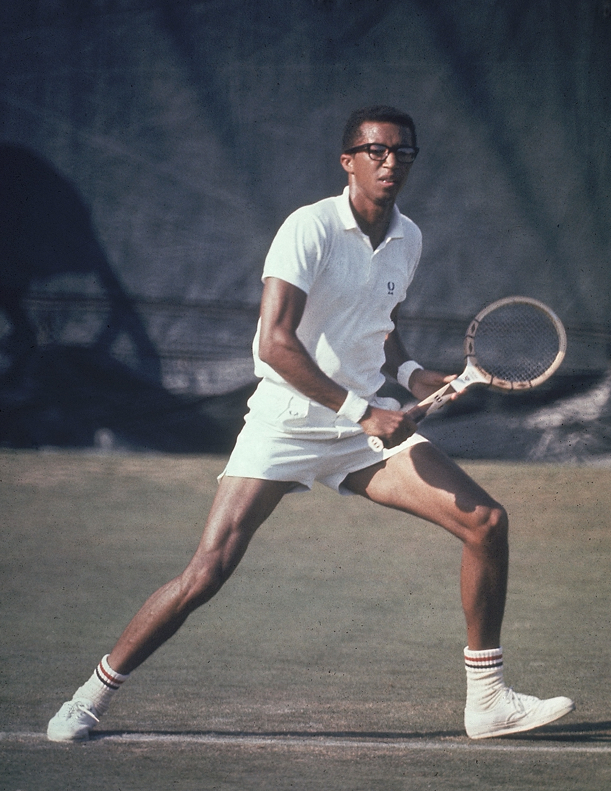 Arthur Ashe grew up in Richmond, Virginia, where racial segregation was still a big part of life in post-World War Two America. Schools, buses, parks and playgrounds were all segregated, with brutal enforcement of the rules.

Ashe was shy growing up and told to stay out of trouble by his protective parents, who knew all too well the difficulties he would face as an African American. He took to his local public tennis courts – just 20 metres from his family home – to keep himself busy and learn how to play. It was here that he first picked up a racquet and found his passion for tennis.

At just 12-years old, Ashe entered the Richmond City Tournament at Byrd Park and was faced with his first encounter of discrimination on the court. The segregated park was not open to black kids, no matter how good at tennis they were, and young Arthur Ashe was refused entry.

It takes a special kind of person to persevere in the face of oppression. But Ashe did just that. The quiet endurance that had been taught by his parents was later reinforced by his tennis mentor, Dr. Robert Walter Johnson. Known as the godfather of black tennis, Johnson was an advocate for breaking down racial barriers in sport, and was all too familiar with the problems in the system. Johnson taught his students to remain polite and calm on the court no matter how unjust their treatment. His view was that the only way a black man was to succeed in a sport like tennis, was to act with absolute composure. It was this advice that got Ashe through the exhausting car journeys when he was unable to stay in hotels overnight, and the countless times he was refused a travel visa because of the colour of his skin. He took everything in his stride, quietly focused on the end goal.

It was this unfaltering perseverance that got Ashe to the Davis Cup in 1963; a scholarship for UCLA; and his first Grand Slam Title at the U.S. Open five years later. As he worked his way up the tennis ranks, Ashe gained the support of fellow tennis champions. He was even gifted with a white polo shirt from Fred Perry with the obligatory initials below the Laurel Wreath; a quiet nod of appreciation from another man who wasn’t always accepted into the privileged world of tennis.

But now he’d got his foot in the door, Ashe was eager to use tennis as a catalyst for change and – with the same composure he’d always exhibited – fight for what he believed in. His first step was to bring tennis to more kids – kids that grew up like himself, and so Ashe instigated an exciting new initiative. With his motto ‘tennis for all’ at the heart of it, the program was initially brought to local communities in deprived areas which were lacking in after-school activities. Having Ashe as the chairman was a powerful tool and an important first step in his advocacy for change.

Back on the court, Ashe was fighting for justice within the higher establishment and became a board member of the newly formed Association of Tennis Professionals (the Players’ Union). There were very strict rules in the early ‘70s about who could enter the Wimbledon tournament, making it impossible for some up and coming international players to enter. What the ATP wanted was simple: more rights for the players; less control for the establishment. In 1973, with Ashe at the forefront, the ATP took on the tennis establishment with a players’ strike. That year 81 of the men’s players didn’t compete, including Wimbledon champion of the previous year, Stan Smith. Their efforts were triumphant and just two summers later, Ashe returned to Wimbledon to become the Men’s Singles Champion. In a celebratory interview he calmly professes of his win: “I know what it’s like to be stepped on. I know what it’s like to see some black hero do well in the face of adversity.”

After his unforgettable accomplishment at Wimbledon, Ashe’s career was cut short after he suffered a heart attack at just 36. He became the non-playing captain of the American Davis Cup team and an early mentor for a young John McEnroe. Ashe’s calming demeanour worked as a sort of antidote for McEnroe’s infamous on-court outbursts. Under his management, the U.S. teams won the cup two consecutive years, until he was admitted for a second operation on his heart.

Tragically, during this second operation Ashe contracted AIDS, and with the same steely determination as he did on the court, he carried on his fight. In 1992, The Arthur Ashe Foundation for the Defeat of AIDS was formed, raising awareness and vital funds for those living with the illness. A role model in so many ways, Ashe made it seem possible to have AIDS and continue to live a normal life. He was seen at demonstrations and charity events right up until his death in 1993.

Today Arthur Ashe’s legacy continues - through the posthumously titled Arthur Ashe Stadium; in the moving words of his autobiography; and of course through his tireless work fighting for equality. In Richmond, Virginia, where he grew up, a statue of Arthur Ashe stands proudly on Monument Avenue. In one hand Ashe is holding a racquet, with the other hand holding a book. A powerful symbol of his achievements on and off the court.