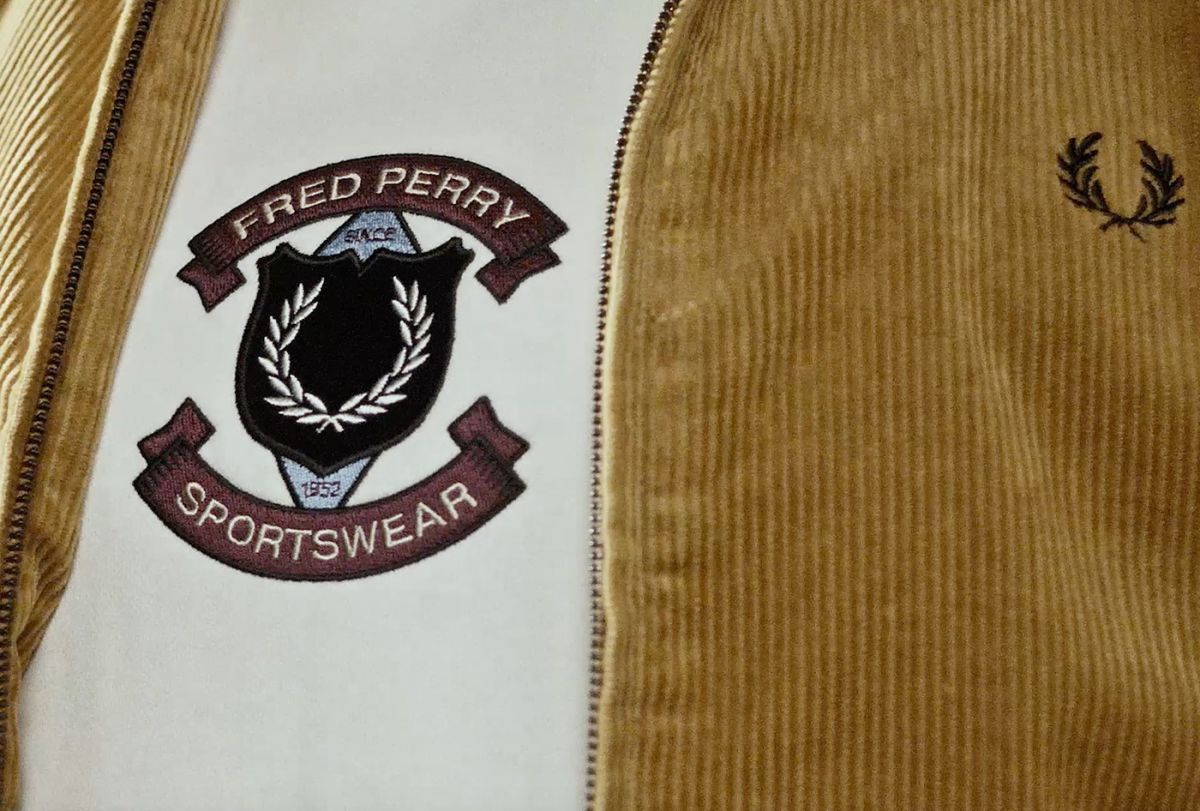 The man behind some of the most seminal artwork in dance music.

"No one knew what was going on, but you could feel it."

Could you please elaborate on this statement?

Well I can put this simply... I had to speak at an Art College lecture a few years ago and I asked for all the lights in the room to be turned off.

I pulled out the Spectrum flyer and shone a small torch in my pocket onto it and said, “this is all you know, DJ’s you haven’t heard of and strange visual graphics. Not even a call (on a landline) by a mate…. No media, just a feeling of utter excitement and anticipation unsullied by the yet to be invented internet.”

I’d say it was like Punk in the early days…If you knew, you knew…. 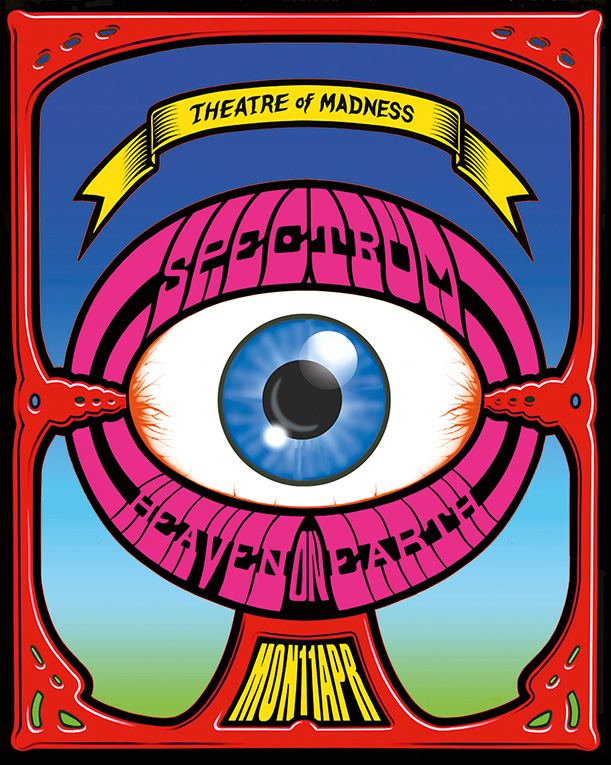 What, in your opinion, were the clubs and nights in Britain that paved the way for a global dance subculture?

He put on amazing illegal Warehouse parties in the mid ‘80s…. Even one in Whiteleys shopping centre in west London which looked like a post nuclear film set (Escape from New York comes to mind) … I remember seeing a big guy wearing a motorcycle helmet covered in mirrors, crazy makeup and clothes. One year later I realised it was Leigh Bowery.

I’d definitely say The WAG run by Chris Sullivan in London and of course The Haçienda in Manchester. I witnessed both Clubs as they morphed within months, hosting full blown Acid House nights.

My favourite would be The RAID run by Paul Dennis and Gary Haisman (Of D Mob “Aciieeed’ fame).

I had designed and painted a 40 x 17ft wide cartoon backdrop by hand with flyers to match…Pete Tong and Terry Farley cut their teeth there.

I could sense music getting weirder – more and more friends were ‘on one’, and there was this mythical club called Shoom which had opened in south London.

One night I ventured down to south London with Paul Oakenfold, at about 3am, to go to his ‘nightclub PROJECT’ in Streatham. It all changed after that!

Soon afterwards, in early November '87, Paul opens Future in central London, in the back adjacent club at Heaven (Soundshaft), the flyer for which I had designed. That club was my first real acid house experience, it turned everything upside down. I think that it was the best club I ever attended, and it only held 200….

I also designed the flyer for the Rage on the same night, which took place in the main club, HEAVEN, next door. It was a hip-hop night, with blends of very early drum and bass and jungle. The difference between the two was worlds apart. We were loved up, listening to The Cult and The Beatles and wearing dungarees, and next door it was black M1 jackets and aggressive sounds. As I designed for both nights, I was one of the few the bouncers would freely move from club to club. 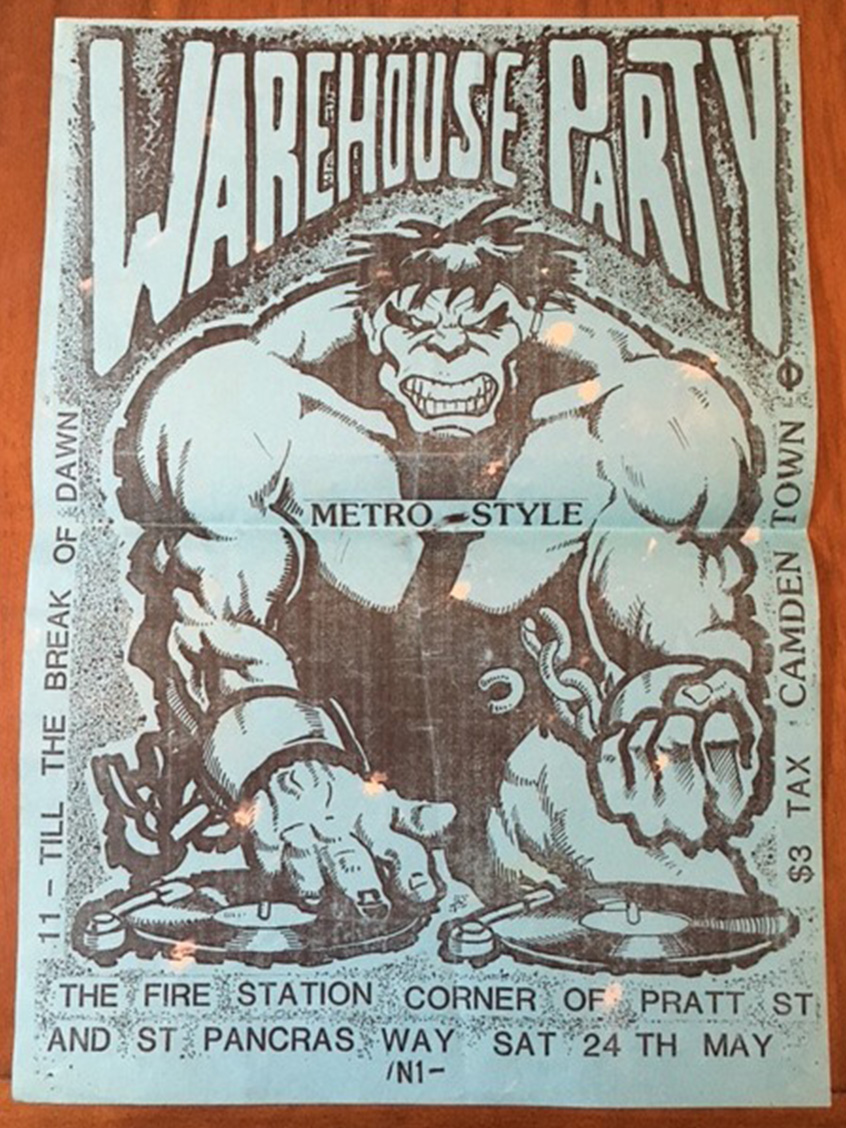 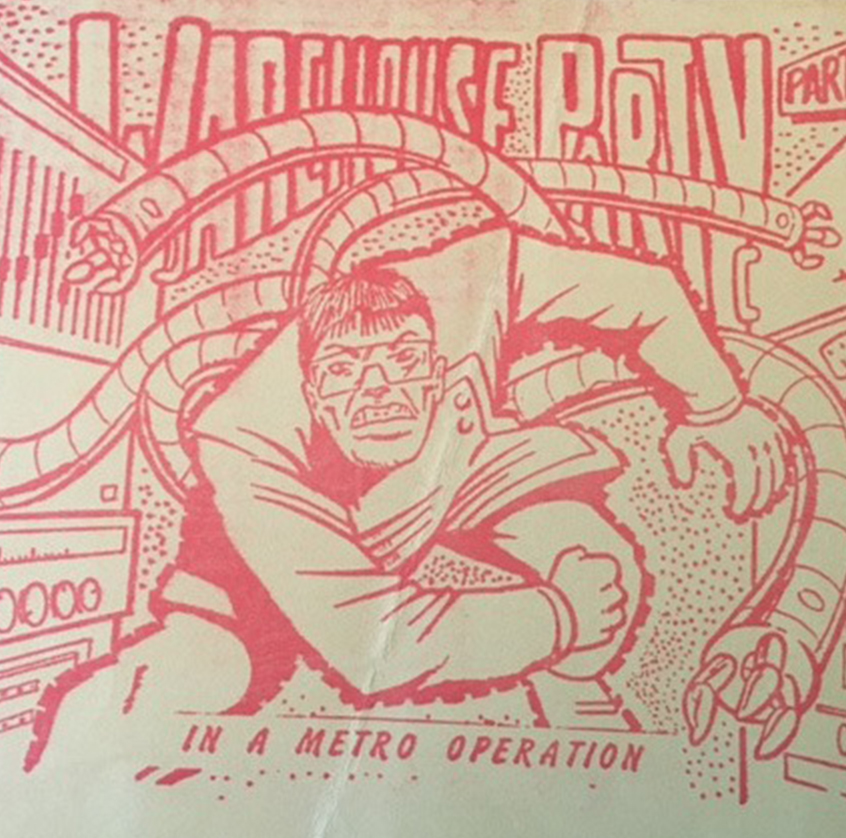 How did you end up creating some of the most important artworks?

My doorbell rang in spring 1986 and there was standing a very dubious bunch of guys. Paul Dennis, Gary Haisman, and the future Boy’s Own crew of Andrew Weatherall, Cymon Eckles, Terry Farley and Steve Maisey. I'd expected a visit from these larger than life characters for more than a week.

After a good cup of tea, I decided that I would actually start flyers designed for a fanzine called Boy’s Own. This is the real type of work I really wanted. I was fresh out of college and working as a freelance illustrator airbrushing Twix bars and Cigarette packets. Great money but utterly soul destroying.

Bizarrely at the same time I got an intro to Rhythm King Records who only had two releases when I got there, and one of them was a hit, “I Love My Radio” by Taffy. Renegade Soundwave were just forming, and my mate Karl Bonnie said, “I want you to do the Renegade SoundWave record sleeve.” I walked into Rhythm King and Martin Heath the owner (who also discovered The Killers) said, “Oh, you’re very good, I’ll hire you on the spot,” and next thing you know, I’d done all these number one hits: S’Express, Bomb the Bass, Beatmaster, plus Baby Ford and renegade Soundwave - all classics of the time.

One mention I must say was fashion designer Michiko Koshino. I ended up in Tokyo with her and created the first modern motorcycle streetwear ‘Motor King’, …It helped that I’m a fast bike enthusiast….! Also, the Pucka Clobba collection, one of the first truly dedicated Club Wear brands. She created the inflatable jacket worn by the Pet Shop Boys. 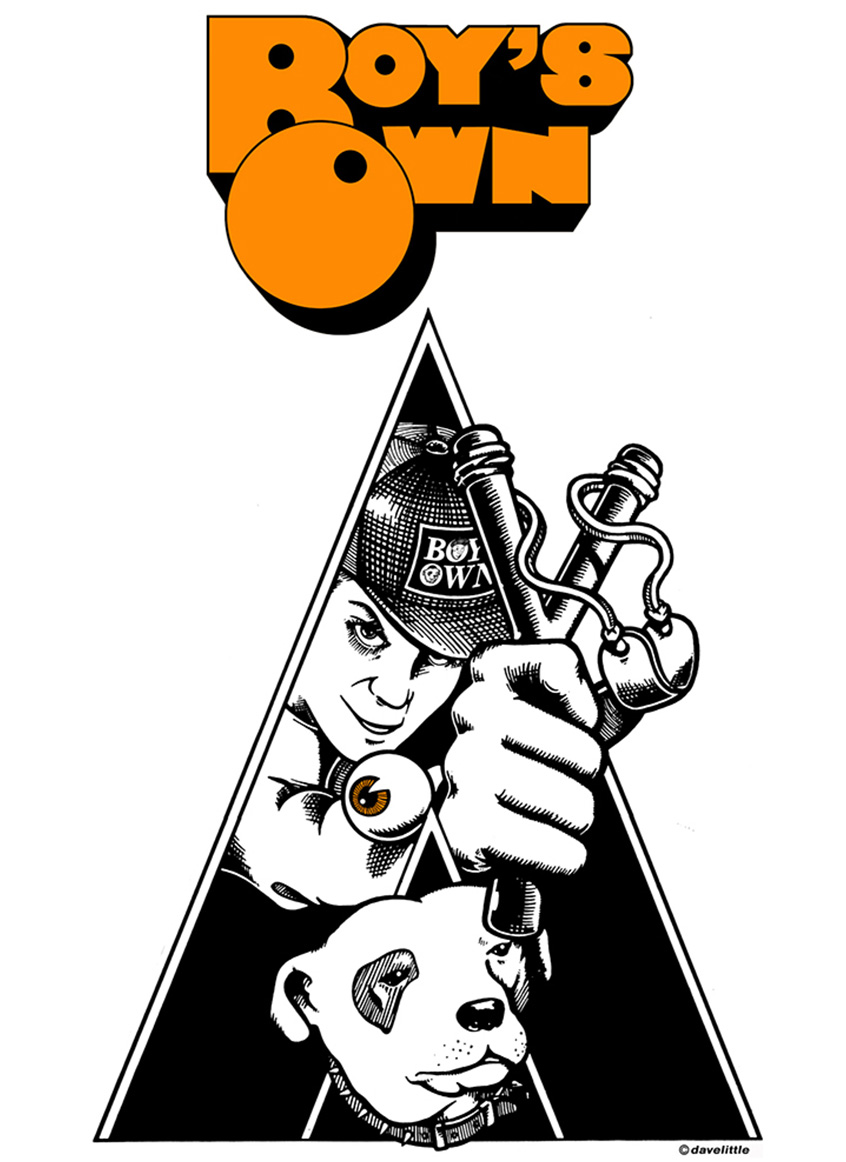 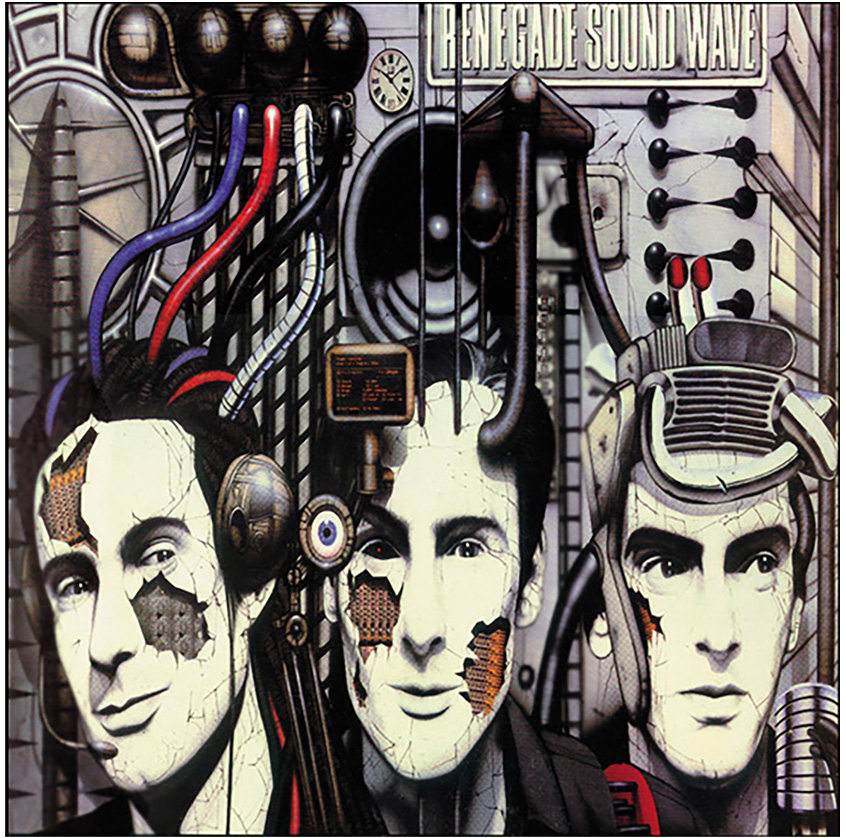 What was your design process – were you set briefs or were you able to create what you wanted?

The eyeball was Gary Haisman’s idea for the Spectrum flyer: “I wanna big f%$king eye in the middle Dave, and Heaven on Earth under it!” That was my total brief, nothing else to go on by that!

I purposely used the Rick Griffin artists Grateful Dead poster border, because what I saw was a second coming of the acid activities in San Francisco with Timothy Leary and Ken Kesey. We were popping acid at college and going on mad mystery bus journeys to Bournemouth.

Gary also give me an idea for the Boy’s Own ‘Boy & Dog’ design…This was a drawing of my Pit Bull Alice and a picture of me as a 14-year-old…!! Plus, the infamous BO ‘Clockwork Orange’ design…All three of these designs were exhibited in the V&A Museum…. not bad for a flyer! 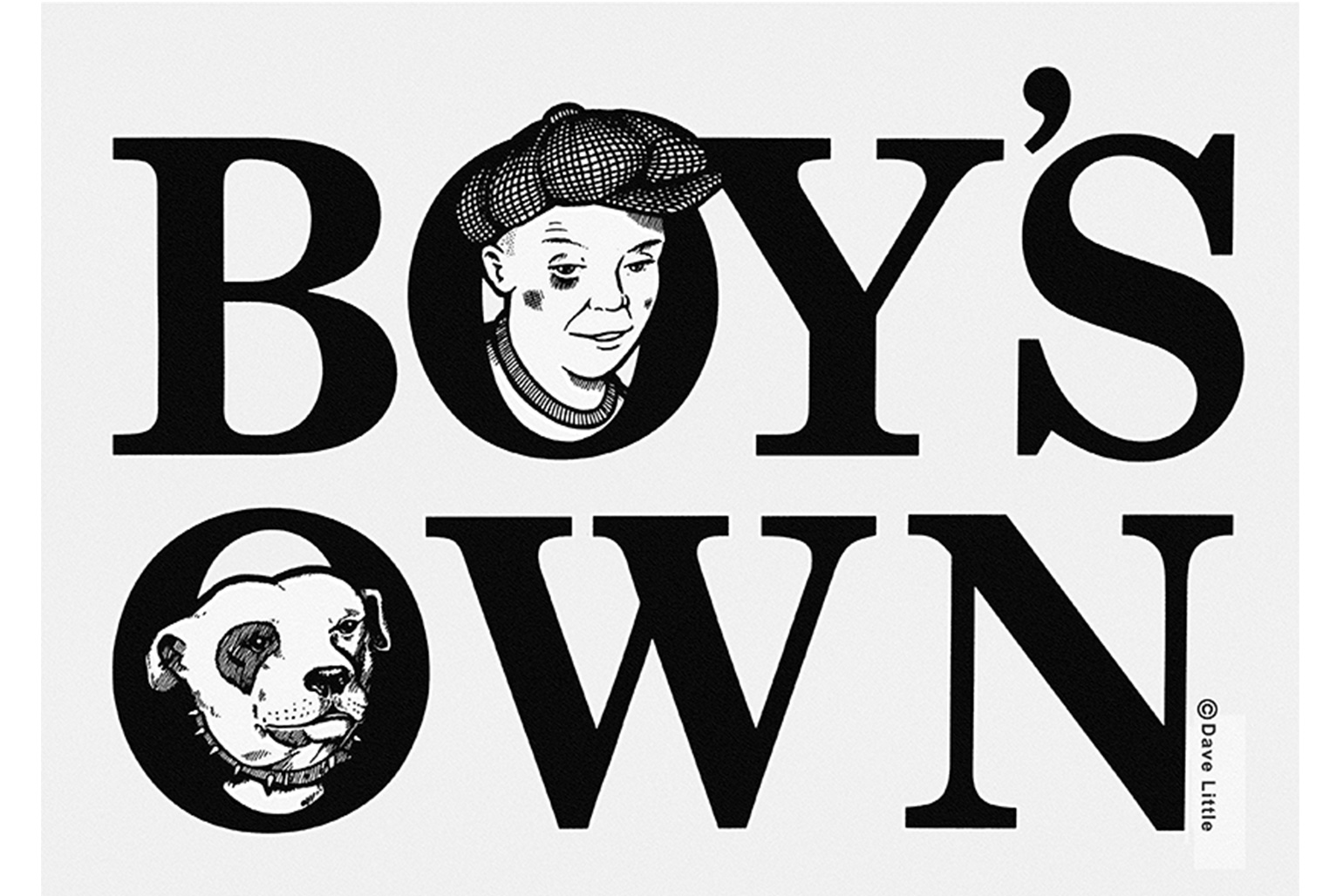 What are some of your favourite artworks you’ve created and why?

Well, there’s a few but I’m rarely happy with much of my work as I can always tweak the designs years later. I’m fond of course of the early sleeve and flyer art, but I also was the main artist for ‘SECRET GARDEN PARTY” and, Freddie, who owned the festival, used to really give me fantastic ideas to work with. The SGP poster was classic despite he changed his mind 70 times!

I was the main artist with Freddie for 5 years - I created animations, posters, websites, metal medals…endless creativity! A great experience! But I must say at the end of the day it’s the people who pick a favourite…it’s not down to me.

Dave Little worked with our creative team on the graphics for a 2020 collection.