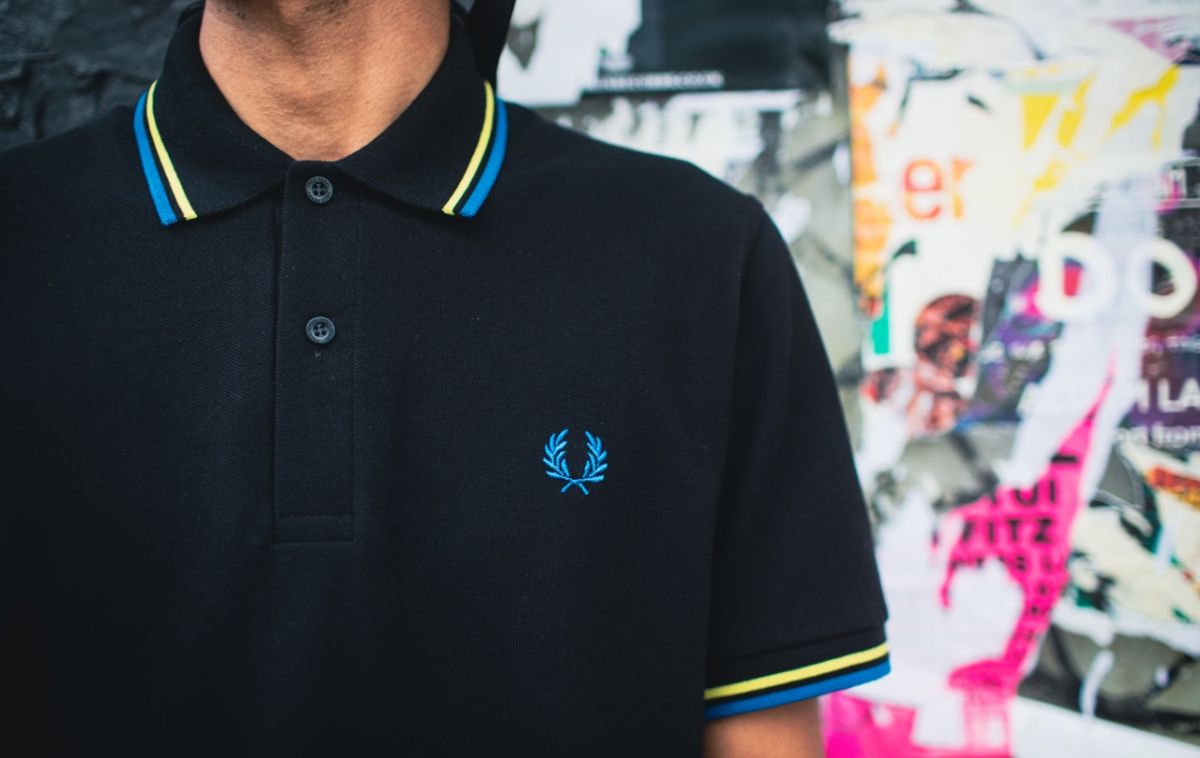 My name’s Alicia Tomkinson, originally from Greater Manchester but now I live in Camden.

Well, I do quite a few things. I study fashion journalism at Central Saint Martins, which led to me being an editorial assistant at Glass Magazine, but I also work at Fred Perry Camden where I'm now a brand intern too.

My style in three words would probably be penny-lane, denim and grunge.

My first memory of a Fred Perry shirt was probably when I started going to gigs back in Manchester as an early teen. I'd only ever seen people like my dad wearing them before, but all these teenagers in their beer and sweat-stained polos, I just found proper cool. I felt like there was a really big community of people who would just pull them out the wardrobe, especially for an Indie crowd, and I loved the fact that I fitted into that.

What’s the best gig you've ever been to in Camden?

Best gig I've been to in Camden would probably be Inhaler at the Round House a couple weeks ago, we'd been counting down the days for it for months and it was so sick. Apart from that, I love going to see upcoming bands at places like Dublin Castle - but the live karaoke at Hawley Arms will be a night I'll always remember.

I spent a lot of time in Glasgow a couple years ago where they have such an amazing punk culture, and I feel like there are elements in that which I still carry now. The music, fashion, attitude, and everything else, I loved. I also think Northern Soul has influenced me a lot, the whole Motown music scene was a massive part of my childhood, my parents used to go to Wigan Casino when they were younger and the music fills our house and car journeys wherever we go. I proper wish I could dance like that. I think my mum and dad have it down.

Probably one of my favourite musicians of all time has got to be Amy Winehouse, obviously. Constantly singing along to her in the flat, she was such a treasure to the world. I'm also obsessed with The Rolling Stones, seeing them in Hyde Park this summer was such a highlight, and seeing Jagger dancing as well as he did in the 60s is something I'll never forget.

What is your favourite independent venue in London?

I think Jaguar Shoes in Shoreditch will always be a favourite, it's where me and my pals all first went out together and you literally couldn't keep us away after that. There's a sick basement/cave like venue downstairs where we've seen sick upcoming bands play like Pleasureinc and Hotel Lux, and it's always a night to remember. With free gigs on every weekend, it's a student's dream really, 100% recommend to anyone who has never been.

What is Camden’s best kept secret?

This is a hard question really. I feel like you spend a weekend in Camden and all its secrets come to life, it's such a magical place and really reminds me of home, I love it with all my heart.

I make music and art, DJ, and I’m the manager of the Fred Perry Bristol store.

Timeless, classic staple, easy to dress up or down. It was the first piece of clothing I ever bought for myself, saved up my paper round money.

What’s the best gig you've ever been to in Bristol?

Tough one but probably Giant Swan, Shackleton, Anina, Metrist & Batu at Trinity Centre for Timedance. Ridiculous line up on the legendary Sinai sound-system.

So many - I come from a background of mixed cultures and grew up with pirate radio and skateboarding. I’m a big raver and I've been heavily influenced by sound system culture, as well as 00s Grime scene, goths, rude boys, punks and all the other well-dressed UK weirdos.

I can't give you one so here's a few: Jabu, Withdrawn, ELDON, O$VMV$M and DJs Anina and Tilly.

What is your favourite independent venue in Bristol?

What is Bristol’s best kept secret?

Well, I can’t tell you that, but The Cube Cinema AKA The Cube Microplex is a hidden gem that shows great films and plays a huge part in sustaining the music and arts scene here.

Best place to hang out in Bristol?

My name’s LJ and I’m from the wonderful city of Nottingham.

It’s a stand-out piece. Dress it up, dress it down you’ll look bloody lovely in it. Suits one and all and that’s not easy to do.

What’s the best gig you've ever been to in Nottingham?

Gaaaargh! That’s such a hard question. We’ve such a grand music scene. John Wizards at Rescue Rooms was BEAUTIFUL! Unknown Era at the Angel Microbrewery was bloody brilliant an’ all.

Rave and grunge. Without a doubt. The style of grunge from when I was a kid. The community and friendships that the rave scene bestowed on me are still going strong today!

What is your favourite independent venue in Nottingham?

Angel Microbrewery in the city centre. Sublime array of gigs and cracking ale.

What is Nottingham’s best kept secret?