Introducing his debut collection with us, British designer Nicholas Daley speaks with jazz muse, Mansur Brown and musician, Nabihah Iqbal about British countercultures and the cross-over of music and fashion.

A mutual interest in the intertwining of contemporary culture and traditional craftsmanship brings Fred Perry and Nicholas Daley together to create a collection celebrating counterculture.

Both celebrate the various British subcultures which have existed in Britain, and simultaneously explore their intertwined connection with music and fashion. Together, our strong links between like-minded collaborators cross paths on many occasions.

The debut collection is based on the continuation of the SLYGO story, Nicholas' homage to his family's role in the emergence of the reggae sound system culture in Britain. SLYGO takes its name from Nicholas' father's DJ alias and draws direct inspiration from his parents' club night known as the Reggae Klub which ran from 1978-1982 in and around Scotland.

“It's the same way I look at a shoe or the Fred Perry track jacket, just looking at the skill and the craft of how it's made. It’s that craftsmanship element that I'm drawn to, whether it's music or the footwear or clothing.” - Nicholas Daley

Presenting acts such as ASWAD, Heptones and Misty in Roots amongst many more, Reggae Klub was one of the first reggae nights in Scotland, becoming a haven for people from minority communities. A key part of Nicholas' heritage, he shares his family history and uses his exploration as a backdrop for the collection to highlight the strong links between music and culture.

The collection is available online and in select Fred Perry shops from September 2019. 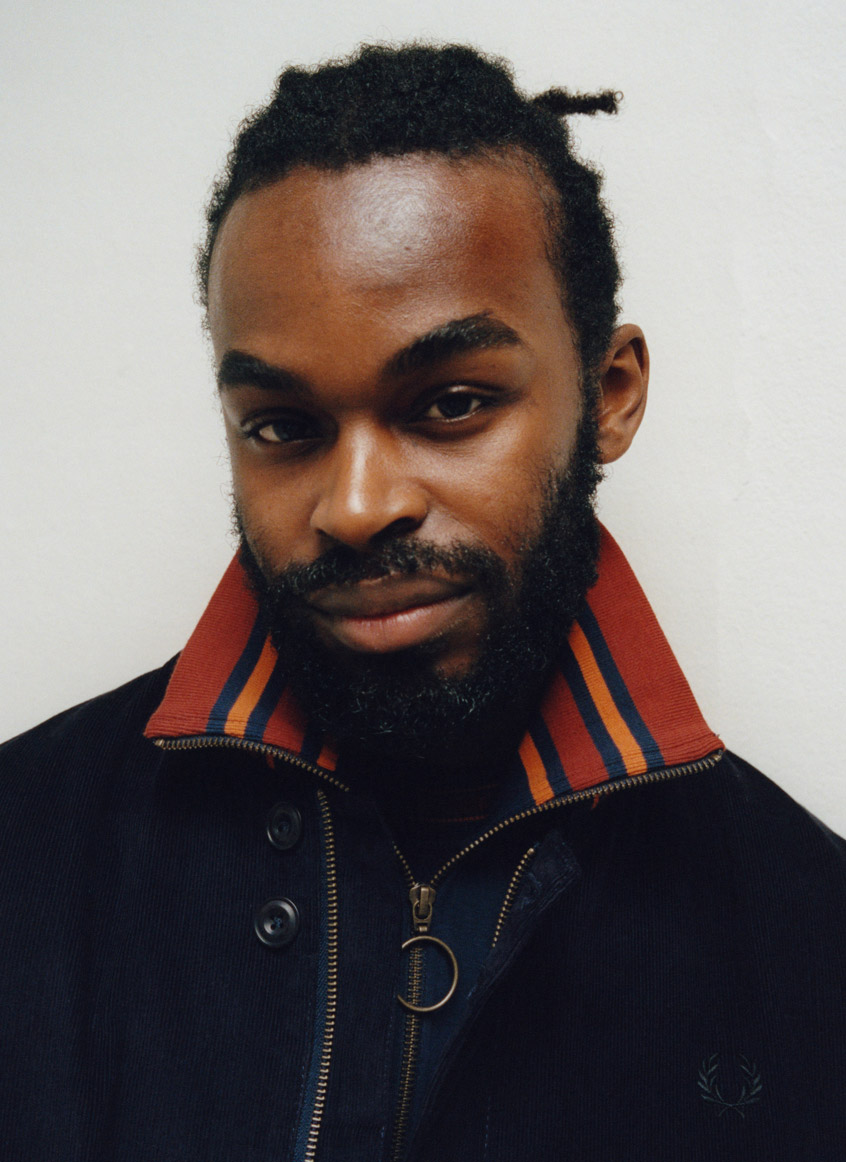 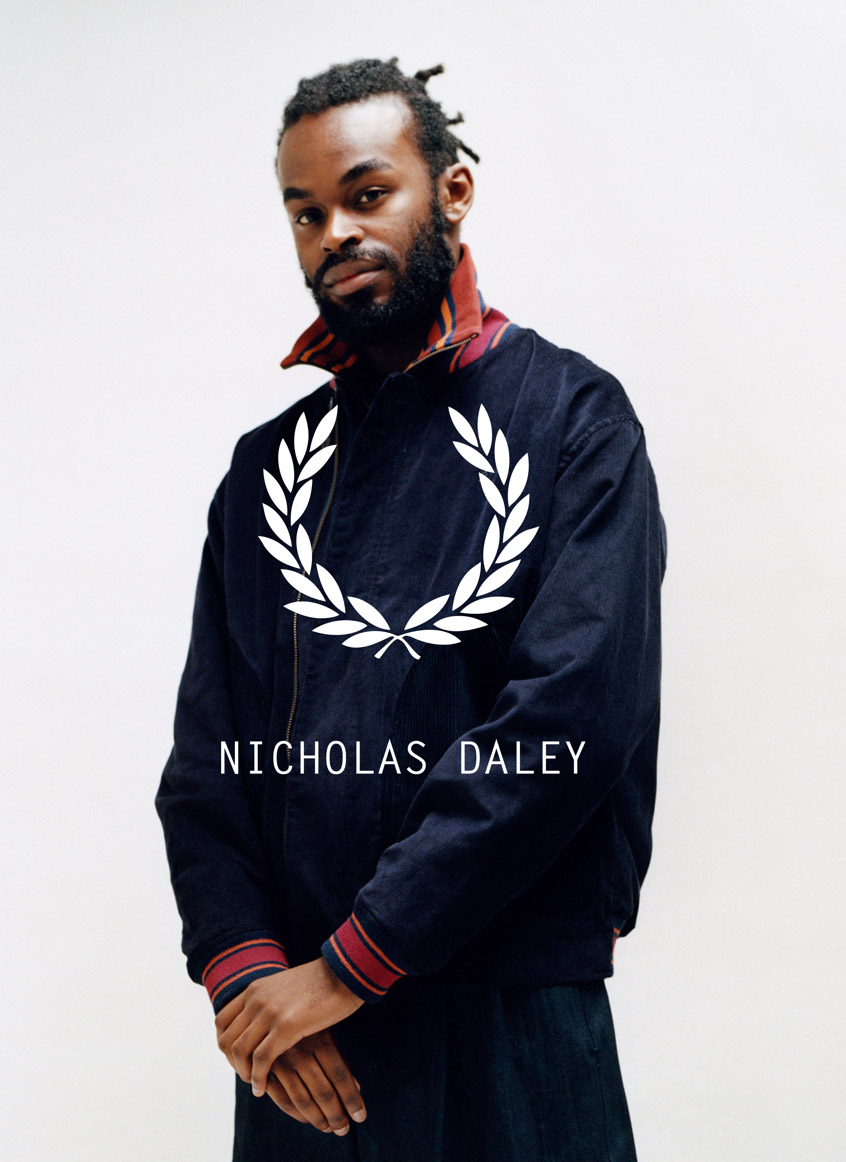 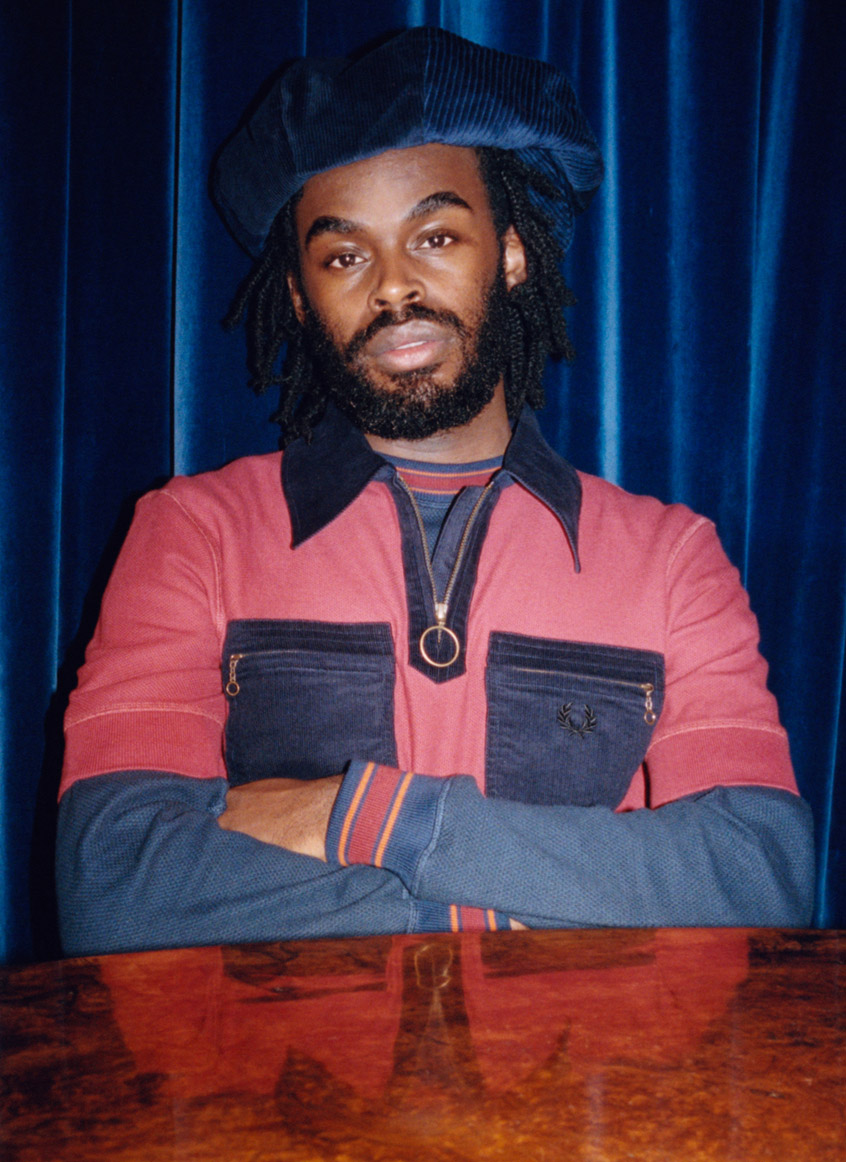 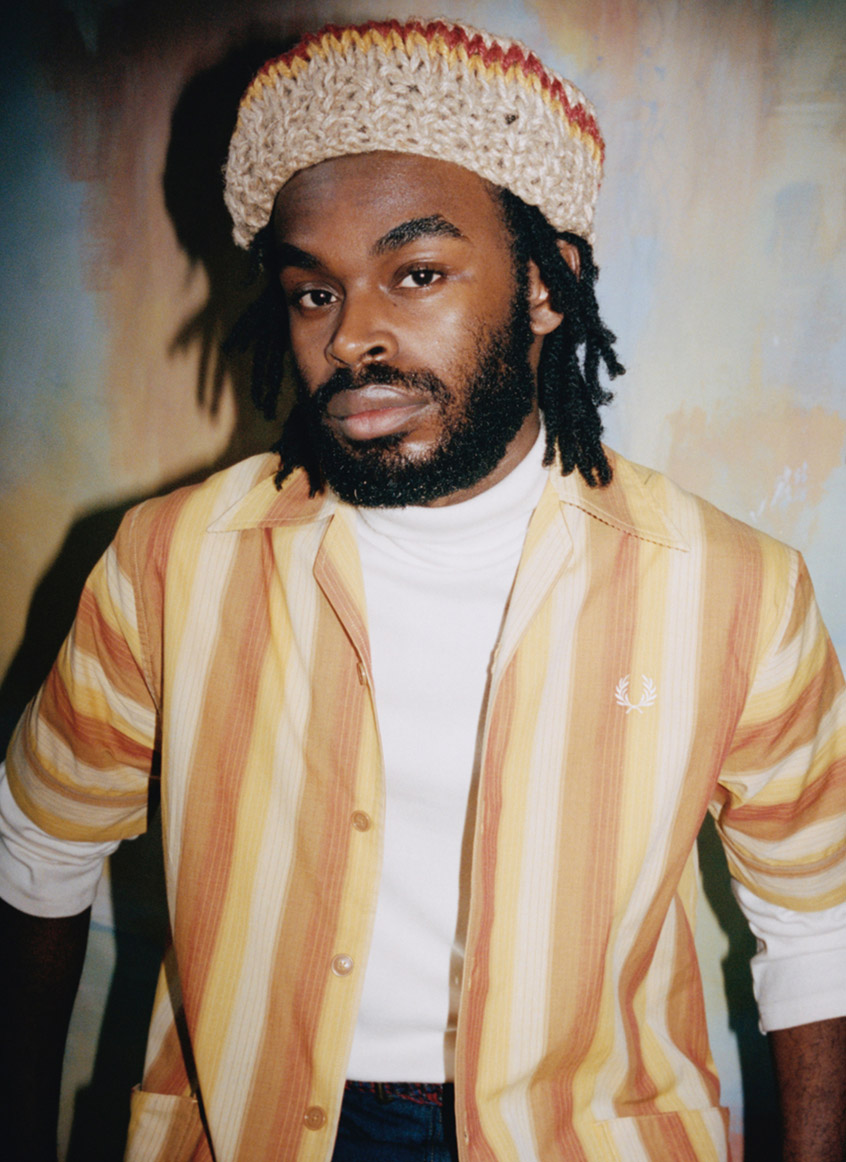 “I look at Mansur and think, what would work for him when he's playing? Is there a particular fabric which is better while he's performing? It's a challenge which I find quite exciting, to collaborate… is there a little pocket for his plectrum? Well, that's going quite specific, but it's more about the feeling or certain fabric or certain cut which works well on someone and how you develop it together. You're sort of cooking together and making this recipe, which hopefully tastes good.” - Nicholas Daley 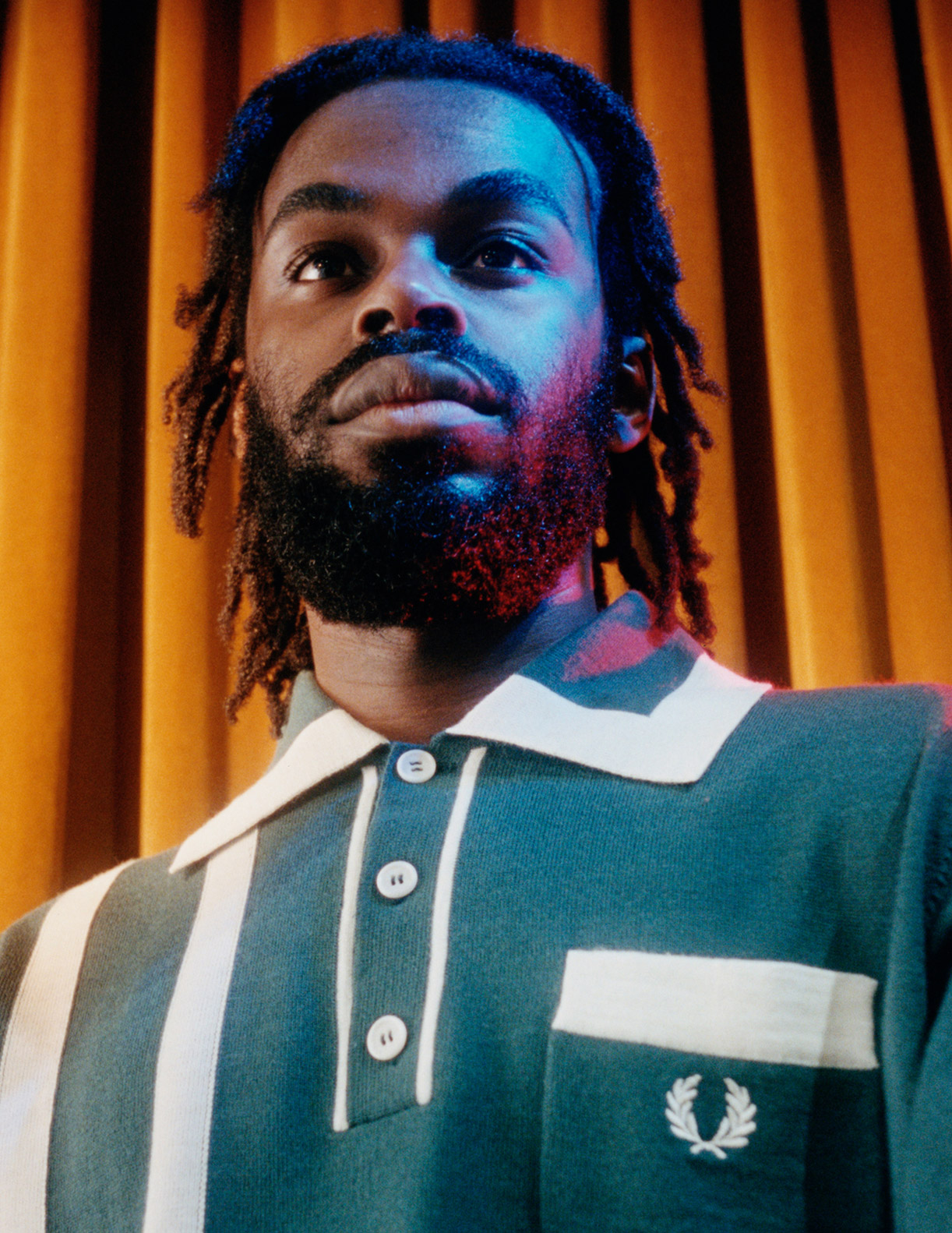 Nicholas Daley: With my dad having his own sound system, and my parents running the Reggae Klub, that inspired this collection, for sure. Both Mansur and I are looking to our past or our heritage and how it informs us today. You know, those little specks of dad or family or that sort of history.

Nabihah Iqbal: Why do you think that's important today?

Mansur Brown: I think your family and heritage is always going to influence what you do in the future, and I just think it's also good to show appreciation for those who brought you into the world. Obviously growing up, your family or your childhood plays a big part in how you operate as an adult. Very subconsciously, a lot of things you normalise from your experience with your parents or whatever your family life is. I think it's a big thing, you have to acknowledge it. It's what makes you as a person.

NI: Yeah, it's true. Nicholas, in every one of your collections, you talk about how it draws back to your heritage. Why do you think that's important now in 2019?

ND: Being brought up in Leicester, it's one of the most diverse cities in the UK so that informed me a lot. I think it's more about highlighting what is British, or what it means to be British. Or being on this island with all our different make-ups, whether it's from the Caribbean or Pakistan or Leicester or London. We're sort of referencing all these things and channeling it through to our creative format, so it's just interesting to come together.
That's the reason why it's so good to work with Mansur. It's amazing to have him play at the shows and it's just nice for our generation to cross-pollinate, because then it feels more honest and authentic. Authentic stories, authentic people, trying to tell a proper story which highlights so much. 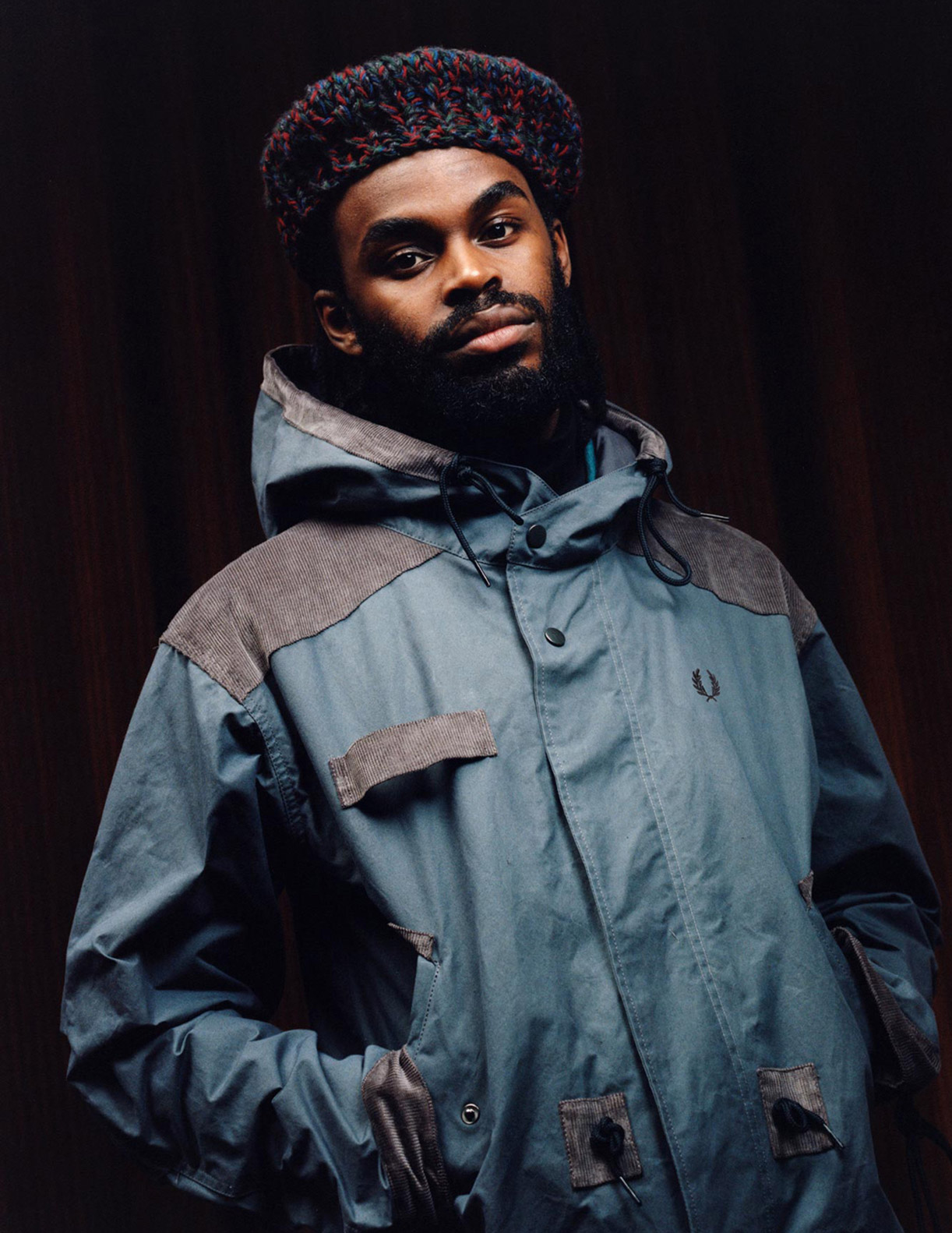 ND: Fashion and music, they're so intertwined; it's another way of self-expression. For me to stand and watch Mansur shred on his guitar, wearing my clothing, that helps create something more powerful. That's what we've said before, if you look at Miles Davis, John Coltrane or Jimi Hendrix, obviously they were amazing musicians, but it was also about the whole feeling; the attitude and the garments, what they're wearing.

NI: What about you, Mansur? How do you feel wearing these clothes that have been designed with music in mind and you sitting there with your guitar… what does it mean to you?

MB: For me, it's kind of a privilege and a blessing that I get to collaborate with very talented people like Nicholas. He's obviously a very gifted designer. If you've seen the ‘Love is the Message' video, the clothes are very much a part of that video. They're just as strong as the music and I think, in musical history, visuals have always been an integral part of it.
Music is a very powerful thing and, sometimes as musicians, you get locked into the technical aspect of it or your perspective of it. To be able to work with Nicholas has been very eye-opening for me because it's inspired me a lot, in thinking about the visual aesthetic of the music.

NI: Why do you think the visual aesthetic is important?

MB: It adds another dimension to your music. If the music is strong on its own, it fills it out as an art. When two powerful things like fashion and music come together, it's able to create a story, a proper story from different angles. You know like in a video, there's clothes and stuff, and then after you've heard the record, it just kind of enhances everything altogether. I've been inspired by Nicholas. It's a pleasure.

NI: I guess for everybody on the outside, it's quite nice to get this little glimpse into the collaboration. Someone like Jimi Hendrix has a look and without even seeing his face, if you just saw the clothes, you would know who it was, and the two go together.

What would you do if you didn't do fashion?

ND: A bit like Mansur, sport was a massive part of my life and those things you learn from it, like working in a team. It was nice to work with Fred Perry because obviously that started as a sportswear brand, so to be able to work on my first tracksuit, the bomber jacket, the M65, the pique polo… it's quite nice. It's fun because it feels like those styles are what I first wore.

NI: You're both talking about how you were in sport before music or fashion - how do you see the relationship between physical exertion, physical discipline, exercise and then the mental state, and how the two go together? I'd say they're really interlinked.

ND: I think Mansur Brown is Mansur Brown because, obviously there's natural ability but you've been playing everyday, nonstop, in the same way that I do with the team. You know, we design every collection, pick out the fabric, do all the samples. It's that process of perfecting your craft.
That's something that I look at as the craftsmanship; that's the reason why I'm collaborating with Mansur because he is a craftsman of the guitar. And he is amazing at it. 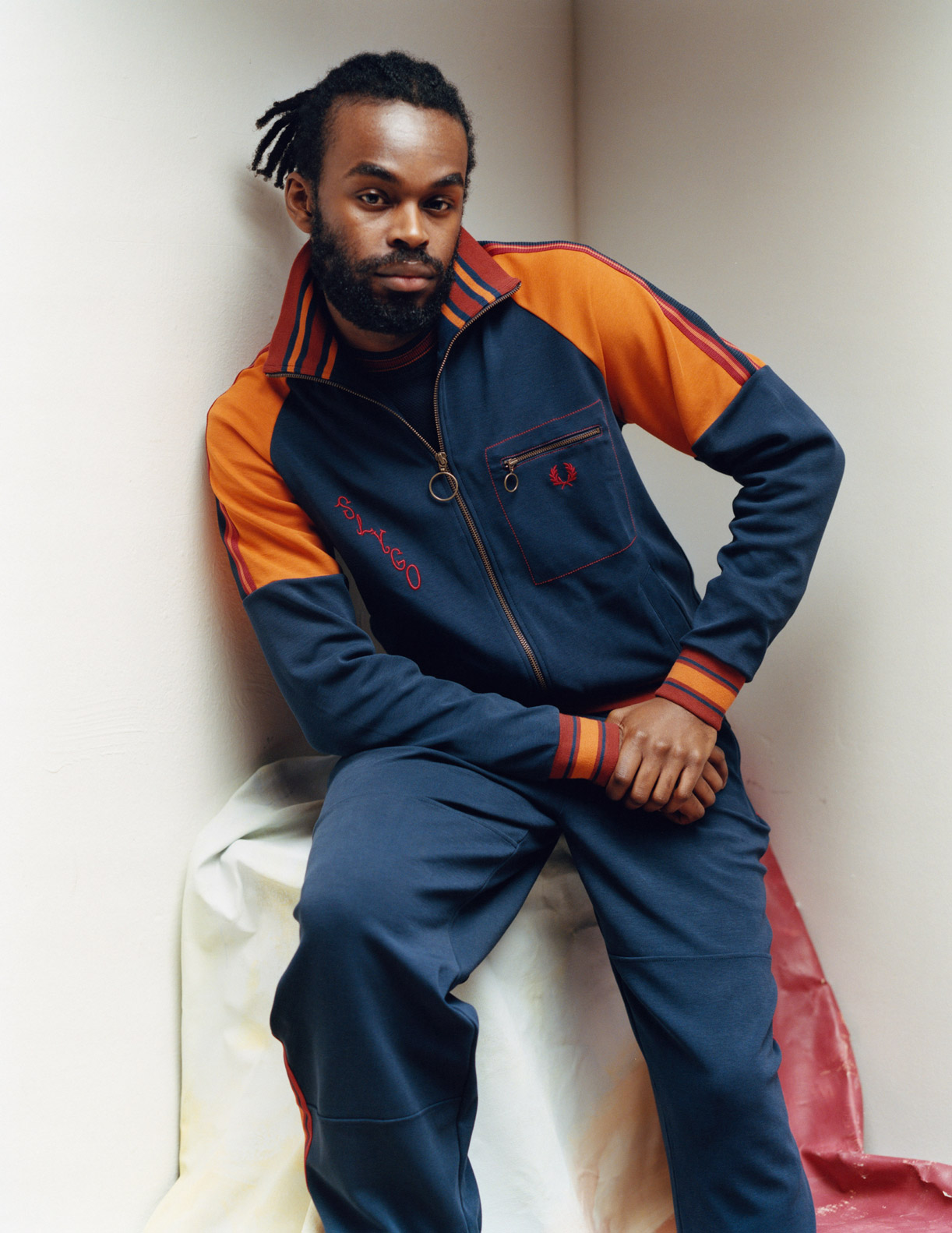