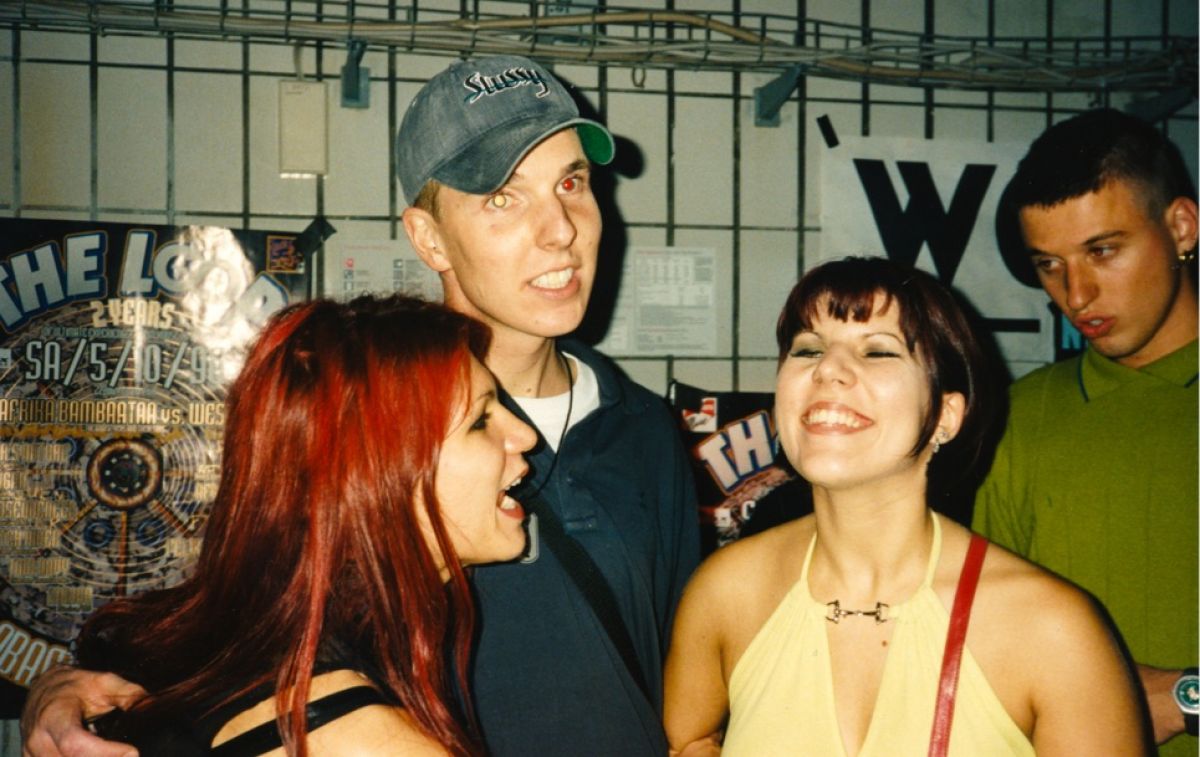 A Trio of Legendary Munich
Techno Clubs from Past
and Present

While Berlin frequently hogs the limelight with the internationally-revered Techno temple, Berghain, Munich has a proud and impressive Techno heritage all of its own. Since the early-90s, Germany’s third largest city - and the capital of Bavaria - has blazed an after-dark trail with some of the most genre-defining and future-facing Techno clubs around. Here, we look at three such Munich-based Techno institutions.

The first two, Ultrashcall and MMA, no longer physically exist, alas, but will not be easily forgotten by those whom zealously frequented them back in the day. Blitz, the third club in our selection, is going from strength to strength, despite the recent challenges presented to the nightlife industries by a global Pandemic.

Across the decades, the three clubs share common values of community, hedonism and fun. And these values have been uniquely sound-tracked by the global language of Techno: mixed by local DJs, and other like-minded DJ talents from all around the world, whom collectively recognise Munich as a true Techno hotspot.

Ultraschall is widely credited as one of Germany’s all-time most influential Techno clubs, fondly remembered by Techno veterans and inspiring awe among younger clubbers in thrall to its near-mythical status.

Where and what happened? Ultraschall took place in two unusual and uncompromising venues during its near-ten years-long lifespan. The first version of Ultraschall, which had evolved from previous underground monthly parties named Ultraworld, was housed in the former white-tiled kitchen of the canteen at the decommissioned Munich Riem airport, situated on the outskirts of the city. Freshly kitted out by its founders with a new sound system, lighting and air conditioning, not to mention upcycled sets and props originally used in the 1985 sci-fi film, Enemy Mine, the ambience and aesthetic set a new benchmark for Munich nightlife. The club’s experimental approach to music resulted in often-raucous, anything-goes Techno sets, featuring fresh tracks from labels including Serotonine, Relief, Kurbel and Disko B, among many others.  The aloofness of its location enabled the club to evolve out-of-sight from the prying eyes of the authorities, encouraging an increasingly wild atmosphere among its hedonistic devotees at regular all-night or all-weekend long parties.

However, after two years of glorious mayhem, the club’s promoters had to seek a new venue, when the premises were earmarked for redevelopment to make way for Messestadt Riem, a new residential and business complex. During the final hours of its closing-down party, tearful regulars tore the venue apart, smashing the place up, and wrenching apart its fixtures to keep as souvenirs.

The promoters then secured a larger space within a regenerated former potato processing plant, at Kunstpark Ost, which was neighboured by more mainstream nightlife venues. Here, Ultraschall 2 thrived (despite some purists preferring its former venue), and broadened its musical remit even further: 24-hour ambient sets and nights focused on House music now complimented the Techno rosta, while art and installation projects were initiated with creative collaborators such as Chicks on Speed and M+M.  Sadly, non-resolved lease renewal negotiations brought about Ultraschall 2’s demise in 2003, prompting its founders to splinter off and focus on their own projects.

The entire dancefloor being arranged as a giant bed for an ambient-themed party. DJ’s occasionally playing impromptu sets in the toilets. Mathew Herbert spontaneously sampling the rustling sound of crisp packets as part of his set. Robert Görl from DAF creating an improvised eight-hour live soundscape with sequencers and a synth at the entrance to Ultraschall as clubbers arrived.

During its relatively brief lifespan, MMA gained a well-deserved reputation as one Germany’s finest bastions of techno and after-hours excitement, notably expanding the usual nightclub remit to also offer exhibitions, theatre and even fine dining.

Who: MMA was co-founded by Mark Maurer and Mathias Arifin, the latter a long-time Munich club promoter, as well as architect Constantin Mascher. Throughout five thunderously successful years prior to its closure, MMA played host to a Who’s Who of international DJ talent, including Ben Klock, Len Faki, Marcel Dettmann, Richie Hawtin, Charlotte de Witte, Adam Beyer, Maceo Plex, Amelie Lens and Ben Sims, to name just a few. Among its much-loved residents were the likes of Essika, Javier Bähr and Svar.

Where and what happened?

Housed in a former 1930s power plant, MMA brought a new and positive energy into an area with a disturbing history. Back in the 1930s, it was one of various properties linked by underground passages, which served the National Socialist German Workers’ Party, more widely known as the Nazi Party. After World War Two, the building was acquired by the Munich City Utilities company. Decommissioned in 2006, it remained empty until 2013, when over 300 tons of old steel turbines, machinery and pipes were removed from the property to create this raw yet fantastical 21st Century nightclub venue. MMA opened to huge media fanfare in 2014.

The main MMA room housed a massive 460 square metres dancefloor, with 21 metres high walls. A smaller basement room, as well as special project room for art exhibitions and installations, and two other gallery spaces, not to mention artists’ studios, completed the multi-media environment. Bricked up windows lining the walls over the main dancefloor would be lit up come nightfall in hues of blue and red, adding to a dramatic, cathedral-like ambience as clubbers succumbed to the seductive techno throb. There was deliberately no VIP room at MMA, as its founders wanted a welcoming policy of inclusivity and equality. A similar open-minded approach was adopted to the DJ roster, whereby the MMA booker Human Rias ensured famed names from the international techno hierarchy could exist seamlessly with emerging German talents such as Kobosil and Etapp Kyle. There was even an in-house Indian restaurant, named Electric Elephant.

This attention to detail and warmth of approach ensured on any given night there could be more than 1,400 people on the main dancefloor, with hundreds more queuing outside the venue, desperate to get in. The Guardian described MMA as a ‘towering techno temple that rivals any in Berlin...’, and it won first place in the ‘Music’ category at the Munich Nightlife Awards of 2016. Alas, unstoppable gentrification brought about the club’s demise: the building’s owners sold it to a property company so that it could be demolished and turned into housing. Despite a high-profile campaign to save MMA, with thousands signing the #SaveMMA petition as well as street protests and much sympathetic media coverage, the club was finally forced to close in April 2019.

Memorable MMA moments: The many club nights which casually ran until 10am the following day, or on other occasions lasted for 48 hours non-stop. The pop-up MMA beach bar on Munich’s Praterinsel island, at which vegan fare and cocktails were served to a backdrop of low-key electro from live DJ’s. The combination of euphoria and melancholy experienced during Adam Beyer’s set at the club’s closing down party: the end of an era.

Keeping the spirit of techno (and other electronic music mutations) alive and kicking, Blitz is beloved of unpretentious clubbers, and is similarly enthused-about by architecture buffs, who adore the clean lines of its interior design.

Who: The Blitz gang all know their stuff when it comes to nightlife and techno, having previously worked behind the scenes at various well-known Munich clubs such as Charlie, Bob Beaman and Registratur. Along with its founder, DJ David Muallem, who heads up the music programme at Blitz, other resident DJ’s include the Zenker Brothers, Julietta and Sascha Sibler. Visiting stars have ranged from Jeff Mills, Monika Kruse and Marcel Dettmann, to Ben Klock, Carl Craig and DJ Hell, plus lots more.

Where and what happened?

Located at what used to be the Deutsches Museum - originally built in 1935 to house a concert hall and planetarium - the building had been turned into a cinema during the 1980s, then lain empty from 2009 until 2016 when the team behind Blitz spotted its amazing potential. By 2017, after extensive renovations and reconfiguring, the club finally opened. Blitz boasts two beautifully designed dancefloors, two bars and designated chill-out areas, a smoking room and a veggie restaurant and beer garden. The sound system at Blitz is legendary, having been bespoke-designed by expert acousticians at VOID. The multi-disciplinary creative Trevor Jackson is responsible for the distinctive Blitz logo and branding.

Aside from the huge attention to detail visually and sonically, the Blitz spirit is one of open-mindedness and equality: DJ’s aren’t raised upon a pedestal above the dancefloor, for starters, and there is a blanket ban on cameras or filming within the venue (similar to Berghain), ensuring guests have space and freedom from scrutiny. Anyone with a non-judgemental attitude and love of music is welcome. A regular queer fetish night at Blitz, named Cruise, has further reinforced the club’s message of acceptance and inclusivity. This free-spirited philosophy has proved mega-popular: Magazines including Faze, Groove and Mixmag have repeatedly highlighted Blitz as one of the best clubs in the world. The Blitz founders’ original contract for use of the premises was for 6 years duration, so hopefully this will be renewed in 2024, with many more years of dancefloor joy to look forward to.

The opening night of the club in April 2017 caused an absolute media furore, after a seemingly never-ending stream of hopeful clubbers began thronging outside the venue, which had filled up to its 600-guest capacity almost straight away. Over 2,000 people were stuck outside, gagging to get in, causing nearby roads and fire exits to be dangerously blocked. Police and fire services were called and the disappointed crowds were ordered to leave the area immediately. There was a lot of moaning about it on social media in the immediate aftermath, but thankfully all is now forgiven!