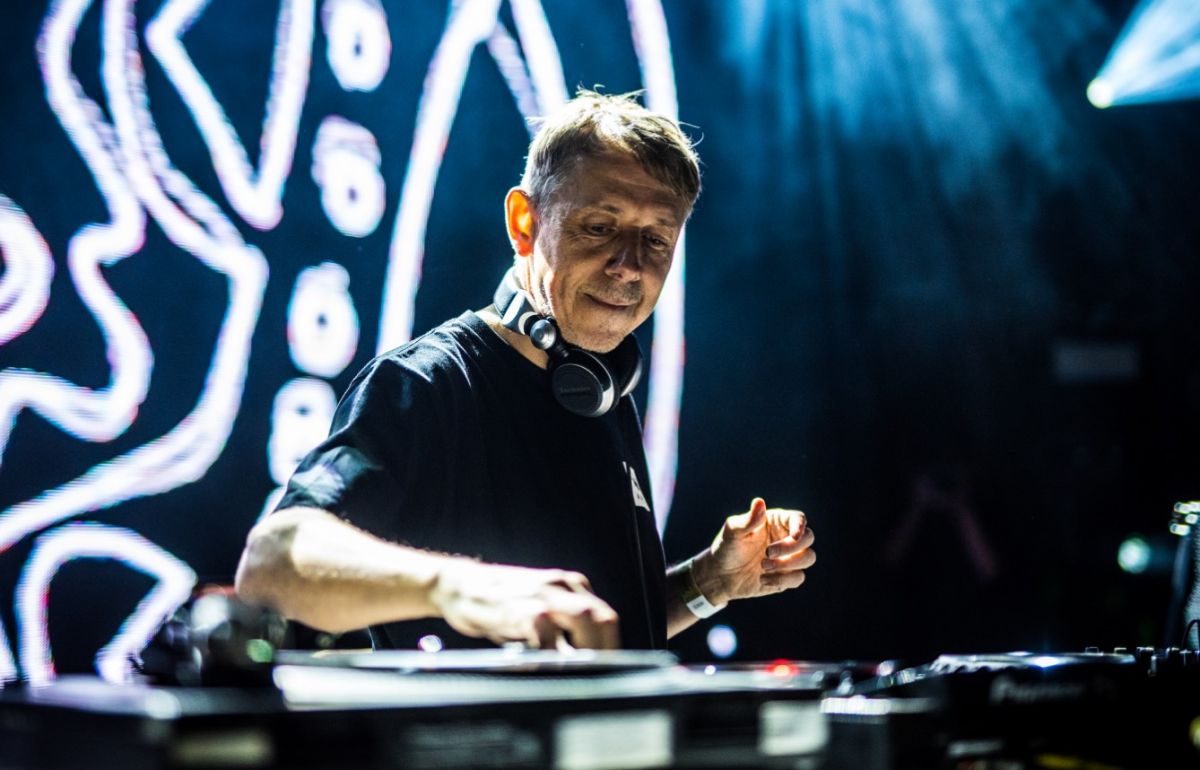 Scarlett O’Malley catches up with legendary DJ and label owner Gilles Peterson on the music that has shaped his career.

What music did you listen to growing up? Tell us which artists defined your youth.

I grew up in France with a French mother and a Swiss father and didn’t come to the UK until later in my childhood. So, the sound of my early years, when I had passed my 11+ and I went to grammar school and was no longer in a French school, I was trying to find my people and it’s when you start to build your identity. I was into Jazz, Funk and Soul. Bands like Maze and Earth, Wind and Fire. Also I remember the first couple of records I bought were by The Specials and Madness. One Step Beyond blew my mind at the time. Then I discovered The Specials from that. Is there any better song than Ghost Town? I think it’s perfect in every way. I was also into things like ELO ‘Mr Blue Sky’ and I was a mad Supertramp fan. ‘In The Land of Grey and Pink’ by Caravan was big for me and the Average White Band ‘Walk on By’ that was a very clear cut magic memory for me. Oh, and Level 42 ‘Love Games’.

Pirate Radio was also a massive part of your youth right?

Yeah man, pirate radio was a big thing for me. If you were under 16 and seduced by the music and scene, and you were into magazines like Blues and Soul and Black Echoes that spoke about it, and you couldn't get into the pubs or clubs, the only thing you had going was Ronnie Vincent on a Saturday or Radio Envictor on a Sunday 92.4. Pirate radio was super critical for me. I sold my train set and bought a Citronic Thames mixer with disco lights and a transmitter from a local bloke at the CB shop and started a pirate radio station from the back of my house when I was 16.

And what tunes were you playing out on this pirate radio station?

It was jazz-funk, it was brit-funk, I remember Light of The World’s album Round Trip coming out in 1980 when I was 16 and I remember playing it at my first disco that we organised, an under 14s disco, we played Time off that album four times as we didn’t have enough records to fill a night. Level 42, High Tension, American Imports, a bit of disco. Radio has been the thread for me and has had a huge impact and has run parallel to everything I’ve done. I realised radio is a really key ingredient in community and being a voice for the movement. That’s why the UK is magical and differentiates the UK and club culture with the rest of the world because it has always had an alternative voice that can break music outside of the club. Radio was my magical way into this world.

You spoke earlier about not having enough records to play when you first started out, when did you begin to collect records and what were you into?

I remember being crazy about groups like Caravan, I was quite into prog. I’d visit my grandmother in the summers when I was a kid, and she had a hotel in a small village in Normandy. She’d go shopping in the town once a week and I would go with her and she would give me 10 francs to buy records with. I remember 3 records that I bought on one of my early trips there. The first one was George Duke called ‘Liberated Fantasies’, one was ‘Percussions Brésiliennes’ by Ney De Castro and Didier Lockwood who was a French violinist. I also spent time at Tennis camps when I was younger and I remember one summer the Saturday Night Fever soundtrack not leaving the turntable. It's a really good soundtrack; that was really significant for me and had a deep impact on my soul at that age.

So, from Tennis clubs to actually going into the clubs, what were your first experiences of nightlife, especially in London, growing up?

I was just going to pubs in South London that had jazz-funk DJs in them: Sutton, Tolworth, Belmont, Kingston, that sort of area. The really early days were pubs with DJs playing imports. I remember a DJ at one of these pubs playing a white label of Linx 'You're Lying’. I remember thinking that was the best record I’d ever, ever, ever heard. I went to Sutton Market the next day because they used to get the white labels and the imports and they were sold out. I was gutted. I remember other significant moments for me was going to the Caister Soul Weekender which was an unbelievable experience and all-dayers at Tiffany’s in Pearly. I’d also go to The Venue in Victoria because they’d have live bands and Brit-Funk Fridays. I was really devoted to the music. I was also a massive Level 42 fan, I followed them everywhere. About 5 years ago at 6Music, Liz Kershaw who was on before me, was interviewing Mark King, the bass player from Level 42 and I couldn’t believe it. And the best thing was he was so happy to meet me, it was really beautiful and we became friends after that. As a DJ, the first promo record I ever got sent was from Elite Records and that was ‘Sandstorm’, so I have a big nostalgic sense of that song.

We’ve spoken about brit-funk and jazz-funk, are there any other nightlife cultures that resonate with you, or any other cultures you grew into past the teenage years?

I was always about dance music, whatever form that took. Significant moments for me; I’d visit my brother in Switzerland where he lived and there was a jazz festival there called Montreux Jazz Festival. I’d get the train there and hitchhike back 60km. I’d go for the whole week and what was great about that festival is that they'd have free concerts in the afternoon. It was the number one jazz festival in Europe in the ‘60s and in a beautiful setting. I’d wait outside the entrance for people’s ticket stubs at night so I could see jazz bands when the people left. Nightlife wise, when I was becoming a DJ, the thing that I’d do is go to wine bars and ask them to do a Tuesday night and I’d fill it up. The next step was to go to clubs, places like the Royalty in Southgate. I’d be given a slot not because I was any good, but because I could bring a crowd.

You've been able to travel and see night life all across the world, where do you think is most exciting right now for burgeoning nightlife scenes?

I think America is a bit better than it has been, I always love going to The States. The weird thing about America and Japan, they are very different, but where they are the same is that they don’t have a lot of spare time and they don’t get much holiday, so when they do go out they really have a brilliant time. In Europe, France is quite interesting, Italy is also really interesting, Australia is amazing, places like Melbourne are ridiculously good. Amsterdam woke up late but they got there in the end. In Italy I really like and have really championed Nu Genea, Dj CoLLaB and Clap Clap. In France I love Roni. The festival I do in France in Sete called Worldwide Festival is the ultimate thing I do as I get the best clubbers to come together from all over the world.

Just talking about stand out acts across the world; post-covid, are there sets that have really stood out to you?

First and foremost I’ve never enjoyed DJing as much as I do now, I absolutely adore it. I love being able to find my way within different scenes and see how I fit. I recently played Erased Tapes which is quite a big techno event at Printworks and out of my comfort zone, but I love that, trying to make my way through scenes and seeing how it fits. Then on the other side, closing Cross the Tracks to 7000 people and finding where I fit in my bonkers mix. I’m probably the definition of how to not do a headline festival set - I show up with records and only an outline of how my festival set is going to be. I’ll play everything from a 160bpm African zoot tune to a track off the Sault album next to a bit of amapiano next to some free jazz. I remember Roska saying to me at Dimensions, Gilles Peterson plays what he wants and I took it as a compliment.

It was an album I wanted to produce inspired by Tyler the Creator at the BRITs in 2019. I don’t often watch the BRITs, but he came on to pick up a lifetime achievement award and he said ‘if it wasn’t for brit-funk I wouldn’t be making the music I’m making’ and I was like ‘oh my god he’s talking about brit-funk, nobody knows about brit-funk’, so I called my old mate Bluey who was in three brit-funk bands and who I’ve worked with a lot and I was like let’s make our brit-funk record. For me, it was about celebrating a little window of brit-funk music between 1978-1982. With this record we start at brit-funk and then through street soul and then end up with the today, with people like Theo Croker and Omar, the jazz influenced live funk scene. Emma Jean Thackery who’s on the album reached out and said she loved STR4TA and I think she’s really talented, 1 of 1, so I asked her to be on this new record. What you should know is that Bluey is the reason all these artists can be doing what they are doing now. If there was no Bluey there would not be a scene, Bluey is the thread. There is no Soul II Soul without Bluey. You know, Incognito, Freeez and Light of the World lay the foundation to give us the Jamiroquais and the Brand New Heavies that gave us our Cleo Sol and Saults. The fact he hasn't got a sir in front of him is outrageous.

Listen to Gilles' playlist on Spotify.